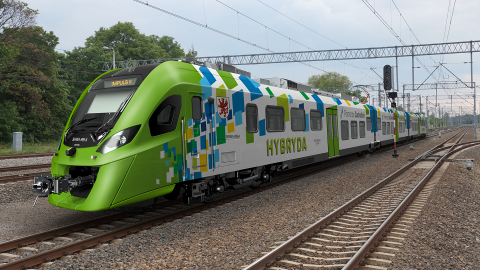 West Pomerania will become the first region in Poland where the bi-mode trains are operated. The new type of rolling stock will be introduced on the Polish railway network at the end of 2021. These vehicles will be produced by the Polish company Newag.

The West Pomeranian Voivodeship became the first Polish region to purchase the bi-mode trains that are able to run on both electrified and non-electrified railways. In March, the voivodeship launched the procurement for delivering two bi-mode trains with a seating capacity for 150 passengers each. The process was finalised four months later. In the mid-July, the authorities of West Pomerania signed an agreement with Newag, the Polish rolling stock manufacturer. Two trains cost 49.2 million zlotys (around 11.2 million euros).

Newag will produce and deliver to West Pomerania the bi-mode two-carriage multiple units, which are known as Impuls Hybrid (or type 36WEh). They will be operated by Polregio, the largest passenger railway operator in Poland, on the behalf of the West Pomeranian Voivodeship. The regional authorities plan to use the bi-mode trains on the 177-kilometre-long line that connects the major cities in West Pomerania: Szczecin, Kołobrzeg and Koszalin.

As the 100-kilometre-long section between Kołobrzeg and Goleniów of the mentioned route is not electrified, this creates obstacles for rail connectivity in the region. The Impuls Hybrid trains will improve the situation and will facilitate the railway services on this line. Moreover, the new type of rolling stock could be applied on the Szczecinek – Runowo Pomorskie route. The bi-mode trains will be introduced intro scheduled services at the end of 2021. Meanwhile, it could happen earlier as Newag has promised to deliver the vehicles this year.

In the coming years, the bi-mode trains could start to run in other Polish regions. Koleje Dolnośląskie, the regional railway operator in the Lower Silesian Voivodeship owned by local authorities, also intends to purchase this type of rolling stock. In February it began the procurement for supplying six bi-mode three-carriage trains. Newag also participated in the process. However, the parties failed to adjust the price. As a result, the Lower Silesian Voivodeship relaunched the tender. It plans to use these vehicles on the Trzebnica – Wrocław – Świdnica line which is partially non-electrified.