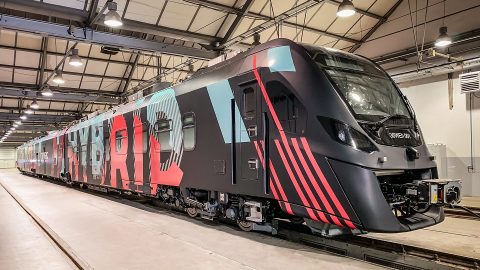 The railway operators in Poland are eying the bi-mode diesel-electric trains. They regard them as an efficient mean to improve their services without additional investment in electrification of the railway lines. At least, two regions in the country will receive this type of rolling stock in the coming years.

Two procurements for the bi-mode trains have been launched since the beginning of the year. The first one was made by Koleje Dolnośląskie, the regional operator in Lower Silesian Voivodeship owned by local authorities, in mid-February. It plans to purchase 11 trains including six three-carriage bi-mode units and five five-carriage electric units. They will be delivered in 2022-2023. The order also includes two options: one for 10 additional bi-mode trains and another for 20 electric trains.

Each three-carriage bi-mode vehicle will be able to carry 330 passengers while the five-carriage electric vehicle will have a capacity for 550 passengers. The bi-mode diesel-electric trains will run on the Trzebnica – Wrocław – Świdnica line which is partially non-electrified. At the same time, the electric multiple units will serve the Wrocław – Jelcz-Laskowice and Oleśnica – Wrocław – Jelcz-Laskowice routes. The entire order (without options) costs 280 million zlotys (around 62 million euros).

Another region interested in the bi-mode trains is the West Pomeranian Voivodeship. Last week it launched a procurement for two diesel-electric trains with an option for 10 additional units. The whole purchase (including the option) is valued at 240 million zlotys (around 53 million euros) and should be fulfilled until the end of 2022. These trains will be operated by Polregio on the behalf of West Pomeranian Voivodeship.

“In Western Pomerania, we have a lot of such routes that are combined: half of the route is an electrified section and half is no. Currently, only diesel vehicles can drive there. In this case, we could use the electric drive on electrified sections, and then switch to the combustion engine,” said Olgierd Geblewicz, marshal of West Pomeranian Voivodeship. The most likely route for the bi-mode trains in the region is the Szczecin – Kołobrzeg – Koszalin line that connects its major cities. Also, the Szczecinek – Runowo Pomorskie route is regarded by the local authorities as a possible line to use the diesel-electric trains.

It is worth to note that Polish rolling stock manufacturer Newag has already developed its own bi-mode train named as Impuls Hybrid (or type 36WEh). The vehicle belongs to the Impuls train family which is popular among the Polish regional operators. For instance, Koleje Dolnośląskie has 27 electric Impuls trains while Polregio on the behalf of West Pomeranian Voivodeship operates 40 units of the same type.

Newag unveiled its bi-mode train last year during TRAKO 2019 trade fair. It consists of three carriages and has a capacity for carrying 330 passengers, 160 of them can travel on seats. It is equipped with all necessary features to provide a comfortable journey for the customers (air-conditioning, Wi-Fi, USB sockets, accessible for the passengers with reduced mobility, etc.). On 24 September 2019, the diesel-electric vehicle has performed the return test trip between Gdańsk and Sopot. “I think that it is a very good solution. This is the future. The hybrid trains. The trains that are able to enter the lines without electric traction,” said Minister of Infrastructure Andrzej Adamczyk after riding on the bi-mode vehicle personally.