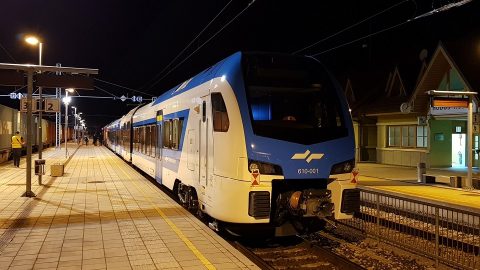 Slovenian national railway operator Slovenske železnice (SŽ) has got its first Flirt diesel train. It is the first vehicle of this type that was delivered by Stadler Rail to Slovenia. The latter will become a new market for Flirt trains which are widely popular in other European countries.

The first Flirt vehicle was hauled to Slovenia on the late evening of Wednesday, 11 March. It was produced at Stadler’s facility in Siedlce, Poland. In the following months, the vehicle will be tested to obtain approval for operations on the Slovenian railway network. Slovenske železnice (SŽ) plans to introduce it for regular service by the year’s end. As a result, Slovenia will become the 16th country in Europe and 12th in the EU where the Flirt trains are running.

SŽ concluded two agreements with Stadler Rail for delivering the new train fleet. According to the 2018 deal, the Swiss manufacturer will produce 16 Flirt trains (11 electric and five diesel units) and 10 Kiss double-decker electric trains. Last year, the Slovenian operator increased its order by adding 26 Flirt trains (10 electric and 16 diesel units). The first 10 vehicles should be delivered by the year’s end while the entire order will be completed by the end of 2022. The Flirt and Kiss trains will be based at the Ljubljana workshop of SŽ-VIT, the maintenance subsidiary of Slovenske železnice (SŽ).