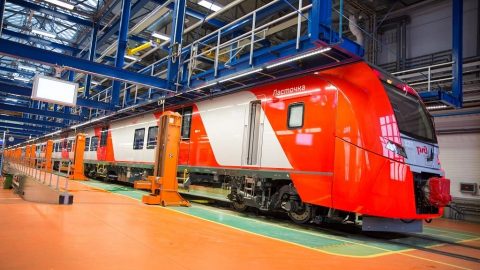 51 trains in Russia got computer vision

Russia-based manufacturer Ural Locomotives, a joint venture of Siemens Mobility and Sinara Group, has equipped 51 Lastochka electric trains with computer vision. This move is necessary for introducing the Automatic Train Operation (ATO) on the lines of Moscow Central Diameters, the S-Bahn-like network in the capital of Russia, in 2021. In the future, Ural Locomotives will install this system on the Lastochka vehicles within the manufacturing process.

The Lastochka electric trains were equipped with a set of the ultrasonic sensors, video cameras, thermal imagers and lidars. All of them provide computer vision for the vehicles and are dedicated to the recognition of the objects on and along the tracks. The ultrasonic sensors are able to brake the trains smoothly and to adjust a stop at the exact place with an accuracy of up to 50 centimetres. Meanwhile, the video cameras are dedicated to the long distances of around 1.5 kilometres and the lidars are for the short distances of up to 200 metres. At the same time, thermal imagers work in bad weather.

On the way to a deadline

51 Lastochka electric trains have been equipped with computer vision during 2019. They will be operated on the routes of Moscow Central Diameters (MCD). Russian Railways (RZD) plans to introduce the automated train traffic on this S-Bahn-like network. According to the company’s officials, this will happen next year.

“In 2021 we would like to invite you (for testing) the unmanned traffic on the MCD,” RZD’s chairman Oleg Belozyorov said to President of Russia Vladimir Putin in November 2019 during the launching ceremony of the first MCD lines. Currently, the experts of JSC NIIAS, a research subsidiary of Russian Railways, and Ural Locomotives are working on the development of the technical specifications for the unmanned trains. As of today, this is not allowed by Russian legislation.

The Lastochka electric trains (‘Swallow’ in Russian) are based on the Desiro platform developed by Siemens Mobility. Originally, they had been manufactured in Germany, at the Siemens facility in Krefeld. After establishing the joint venture of Siemens Mobility and Sinara Group in 2013, the assembly was arranged in Sverdlovsk Region of Russia.

Ural Locomotives has already produced over 200 Lastochka vehicles. In June 2019 the first Lastochka train was equipped with computer vision. Two months later, it performed the first automated run on the Shcherbinka railway test ring (read more about it on the link below).