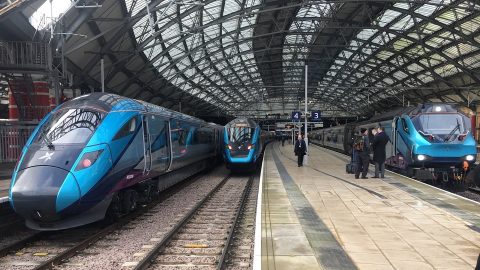 The official launch ceremony took place at Liverpool’s Lime Street Station on Friday, 22 November. TransPennine Express, a subsidiary of FirstGroup, uses the new rolling stock for providing train links between major cities of Northern England and Scotland. “The name Nova reflects the positive changes that will truly transform rail travel for our customers, with an enhancement to customers experience on board and an increase in capacity of 80 per cent on all routes,” the BBC quoted the words of Leo Goodwin, the managing director of TransPennine Express.

The Nova fleet consists of three different types of five-carriage trains. Nova 1 bi-mode multiple units, also known as Class 802, were produced by Hitachi Rail. They can ride on both electrified and non-electrified lines. This type is based on Hitachi A-train family. Each train has a seating capacity for 342 passengers, 24 of them are able to travel in the first class. TransPennine Express operates 19 Nova 1 vehicles on the routes between Liverpool, Manchester, Newcastle and Edinburgh.

Two other types, Nova 2 and Nova 3, were manufactured by CAF. 12 Nova 2 trains or Class 397 electric multiple units serve the electrified routes between Manchester and Liverpool to Glasgow and Edinburgh via Preston. Each vehicle is able to carry 264 seated passengers, 22 of them in the first class. This type is based on CAF’s Civity train family.

The remaining 13 Nova 3 push-pull trains are also known as Mark 5A and have a seating capacity for 287 passengers including 30 seats in the first class. They run between Liverpool, Manchester, Leeds, York, Scarborough and Middlesbrough. “These new trains offer more seats, improved connectivity and a higher standard of comfort,” Leo Goodwin said.