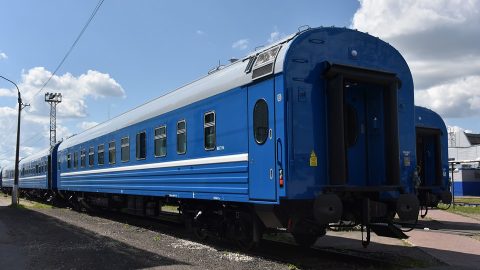 Transmashholding starts production of carriages for Egypt in Hungary

Russian rolling stock manufacturer Transmashholding (TMH) has completed harmonising the technical configuration of the passenger carriages to be produced for Egyptian National Railways (ENR). It allows the company to start the production of cars at the facilities of its Hungarian partner Dunakeszi Járműjavító.

The first prototypes should be completed this autumn. Half of 1,300 ordered coaches will be manufactured in Hungary. Another portion will be produced in Russia at Tver Carriage Works (TVZ), a part of Transmashholding. The technical configuration of the coaches was approved at the recent meeting of Transmashholding with the Egyptian delegation – representatives of the Egyptian Ministry of Transport, Egyptian National Railways (ENR), the Chamber of Commerce of the Russian Federation in Egypt.

The parties have discussed only the features of third-class cars with forced ventilation. Each carriage of this type will have 88 seats, it will be equipped with two toilets and LED lighting. The TMH-made cars will be suited to the climate conditions of Egypt. The third-class carriages with forced ventilation are the most numerous series to be produced by Transmashholding within the order. The first 30 units of this type could be delivered to ENR in December.

ENR has ordered 1,300 passenger carriages from TMH in September 2018. All the cars will be seated. The entire batch is divided into five types of carriages:

All the carriages should be supplied within five years. They will have a 40-year guaranteed lifespan.