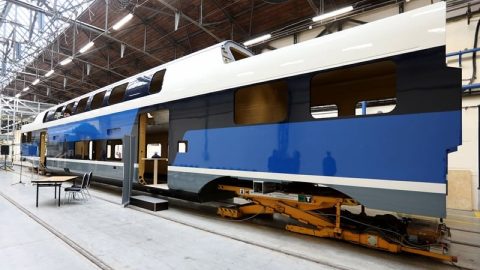 Russian rolling stock group Transmashholding (TMH) has set up two joint ventures – TMH Hungary Invest and Transmashholding Hungary (TMH Hungary). With their help, TMH will participate in the exclusive negotiations with the Government of Hungary about the acquisition of Dunakeszi Járműjavító (DJJ), the country’s largest rolling stock maintenance and manufacturing company.

Two joint ventures were established by TMH International, a Switzerland-based subsidiary of Transmashholding, together with a local partner Magyar Vagon, a Hungarian investment company (both companies own the equal shares in joint ventures). The Russian group intends to invest in the modernisation of the DJJ’s facilities. TMH Hungary Invest will provide the investment programme while TMH Hungary will operate the Hungarian plant after its finalising.

Transmashholding intends to use the Hungarian facility for assembling and maintenance of its own production and the rolling stock made by other companies. DJJ will participate in the manufacturing of 1,300 passenger coaches for the Egyptian National Railways (ENR) together with Tver Carriage Works (TVZ), also a part of Transmashholding located in Russia. TMH is discussing with Government of Hungary the possibility to purchase DJJ since 2016. Initially, the Russian company intended to buy the plant totally but then changed the approach to the joint venture.

Dunakeszi Járműjavító (DJJ) was established in 1911 as a rolling stock workshop. After the First World War, it was transferred under the control of Magyar Királyi Államvasutak, a predecessor of today’s Hungarian State Railways (MÁV). In 1992 the facility was incorporated as a separate company owned by MÁV. The German rolling stock manufacturer Adtranz (today is a part of Bombardier Transportation) acquired 39 per cent of DJJ shares. Later the German-controlled package was increased to 65 per cent, the other 25 per cent were still owned by MÁV, while the remaining 10 per cent were controlled by the employees.

In 2001-2014 DJJ was called as Bombardier Transportation MÁV. Afterwards, the Government of Hungary bought back the plant. Currently, the company is served the numerous customers from entire Europe by providing the maintenance of rolling stock and assembling it. For instance, DJJ is assembling the Stadler-designed Kiss double-decker trains for MÁV. The first train of this type was rolled out in the mid-July.