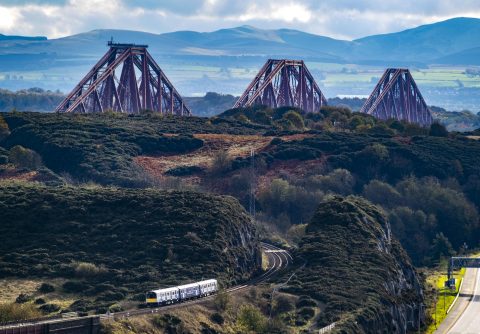 Published on 15-06-2022 at 10:07
Vivarail train, former London Underground stock, having crossed the Forth Bridge in ScotlandNetwork Rail

Great British Railways (GBR), the new overarching management body in the UK, must be ambitious for the future of rail. That is the message from the Railway Industry Association (RIA), making an early response to the UK government’s legislation consultation. GBR is set to take over the running of much of the UK railway network, planning and operations at some time next year.

The GBRTT has also announced its summary of responses to its consultation on the 30-year Whole Industry Strategic Plan (WISP). The report summarises the evidence of the 307 organisations and individuals that responded to its call for evidence. Decarbonisation, accessibility, and integration with other transport modes are all key themes.

The best of the private sector

“These announcements are a welcome step forward in the journey to establish Great British Railways and its passage through Parliament”, said Darren Caplan, Chief Executive of the Railway Industry Association (RIA). “Thousands of rail businesses play a vital role in the construction and operation of the UK’s railways, and so it is good to see the Government recognise the need to harness the best of the private sector.

“We also support the proposal for the licence from Government to require GBR to encourage private sector involvement and take account of the benefits of rail investment for the economy and the supply chain.” So far, GBR has been working to find a headquarters – by launching a national competition which, although derided for a lacklustre video with the transport secretary, has attracted over forty entrants from communities around the UK.

The backbone of a reliable transport system

While the consultation and transition process takes place, the industry says it is vital that the Government avoids a hiatus in current work and decision-making on rail projects. The RIA echoed calls from across the industry, and urged the government to get on with delivering these reforms to provide businesses with as much certainty as possible.

“This consultation comes at an important time”, said Caplan. “Given the clear demand for rail, it is essential that GBRTT is ambitious about rail’s future and maximises the benefits of investment, to ensure rail is the backbone of a reliable and clean transport system.“We will continue to work with our members to review and respond to the consultation by the deadline of 4 August.”

“Ambitious” is not sufficient!
The other modes, offensively upgrade, for added load capacity, for low costs, etc. (A sustainable rail freight growth, urgently call for high quality JIT service rendered, equally or better, than by road mode!)
Ports, ocean, etc. connected by timely, high capacity railways, now shall turn England to “Singapore” of hemisphere!
Goal of EU membership shall remain and be reinforced! Off shore feeding now shall offload on shore dito at Continent – a win win!