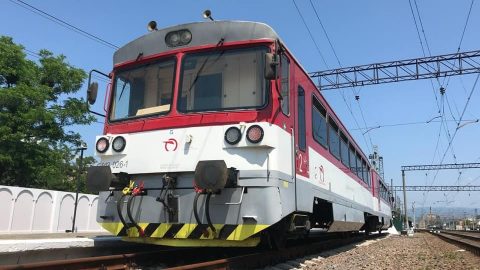 Ukrainian Railways Ukrzaliznytsia says it is ready to evacuate city residents near the demarcation line  on Thursday morning and has entered the emergency operation mode. Most trains are scheduled to remain running on the day a war has started, only trains to Kharkiv are suspended for now.

As of 10:00 AM on February 24, most passenger trains, all trains to Kyiv and the capital, as well as western trains run on schedule, says Ukrzaliznytsia, Ukraine’s state railways. The conflict situation between Ukraine and Russia escalated around 5 a.m., when Russian military forces launched attacks on multiple fronts in Ukraine, while the Ukrainian president declared martial law in the country.

On social media, video’s circulate about long lines for train tickets at stations, among which Kyiv and Kharkiv central train station. To Kharkiv however, a city just 80 kilometres from the Russian border and one of the cities where explosions have been reported, Ukrainian Railways has temporarily stopped the movement of trains this morning. Eastern trains continue to run at a safe speed, with slowdowns and stops possible for safety reasons near stations that are equipped with shelters. This applies to the direction of Mariupol across the Dnieper.

I am at Kharkiv train station: hundreds of people are queuing to buy tickets and flee eastern #Ukraine… pic.twitter.com/TCxSEOsbHc

Ukrainian Railways announced that evacuation rides are planned to be performed from multiple regions and stations today. Also from both self-proclaimed ‘People’s Republics’ of Donetsk and Luhansk, evacuation trains are scheduled to run. From Luhansk region, two evacuation trains will depart from Svatovo, Rubizhne and Lysychansk this afternoon. From Donetsk, two trains will depart from Kramatorsk, two – from Mariupol, one – from Kostiantynivka.

From the port city of Odessa on the black sea, one evacuation train will be sent today. For security reasons, the exact time of departure and destination are not disclosed. Ukrainian Railways urges people to remain calm and follow the official announcements in the Telegram-channel of Ukrzaliznytsia, at the stations and arrive for boarding 30 minutes before the scheduled departure.

In a statement on Ukrainian Railway’s website, they stress the importance of providing critical transport infrastructure. “We have to transport passengers safely and on time and ensure the transportation of goods at all times. As of today, we will work from our Operational Headquarters, which will be coordinated with the Government, the National Security and Defense Council and other bodies,” announced the company.

At the same time, Ukrzaliznytsia’s representatives stressed that operations will continue unhindered. “The company continues to work on schedule. I thank all my fellow railroad workers for their coordinated work, which guarantees the work of the economy and ensures the country’s defence capabilities. With the help of the discipline and coherence of the railways, we will meet all the challenges,” commented Oleksandr Kamyshin, chairman of Ukrzaliznytsia.

Sister publication Railfreight.com updates about the impact of the Russian invasion in Ukraine on international rail freight transport

A minor detail: the picture is not an Ukrainian train. It is a Slovak railbus. Operating on standard gauge across the Ukrainian border.