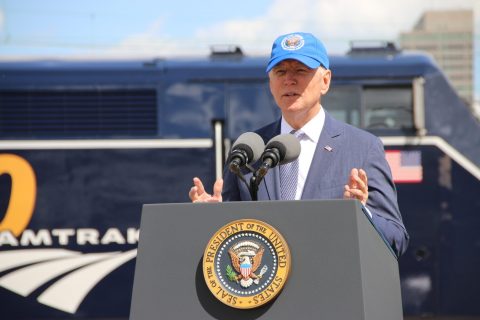 The US Congress has approved a comprehensive package of infrastructure investments. Sixty-six billion dollars will go to the national rail network. The approval is an important victory for President Joe Biden, who proposed the package worth 1 trillion dollars (865 billion euros).

Biden’s plan not only met with resistance from the Republicans, but also encountered much opposition within his own Democratic party. After days of negotiations, the government managed to get the Democrats to agree on Friday evening.

The American House of Representatives finally approved the investment package by 228 votes to 206. Thirteen Republicans supported the plans. Biden wanted bipartisan approval for the hundreds of billions of dollars for infrastructure, he often emphasised.

That will be more difficult for the other part of Biden’s economic campaign, which he calls ‘Build Back Better’. The American social safety net would be greatly expanded by this new 1750 billion dollar investment package, including free childcare. A lot of money has also been set aside for the fight against climate change and cheaper healthcare. Republicans shudder at these plans, which in their view make the government far too influential and, according to some congressmen, “Marxist”.

Within Biden’s own Democratic party, there was disagreement about the package, so the president already had to slim it down considerably so that all party members would support it. Actually, Biden also hoped to have steered the more than 1.7 trillion in social investments through the House of Representatives. But at the last minute, some party members demanded that an independent audit committee recalculate the White House plans.