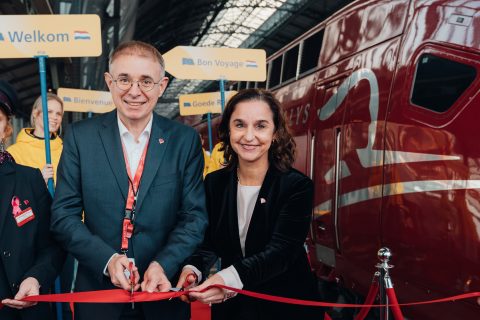 Thalys is a well-known player in European high-speed trains. The name of the international red train will disappear however with the upcoming merger with Eurostar, but not its characteristic colour.  Bertrand Gosselin, Thalys CEO, explains why this name was chosen.

The Covid pandemic delayed the merger, but the companies behind Thalys and Eurostar are now resuming their earlier plans. From mid-2024, the Thalys will be called Eurostar. The merged holding company will be based in Brussels. “The main reason for choosing the name Eurostar, is because Eurostar is much better known outside Europe. In America, for example, they don’t know Thalys”, said CEO Bertrand Gosselin when the design of the renewed Thalys trains was presented in Amsterdam.

Such a decision is preceded by a kind of trial of strength. “Because we have such big plans, we really want to bet on the strongest brand”, he continues. “That way we can develop even further. Eurostar has become an umbrella brand.” There will, however, be a subtle distinction in the design of train sets. “We will retain two products: red and blue. Red for the current Thalys trains and blue for Eurostar. Then we will have two products that are a little different from each other, but under a common brand.”

Whether the choice of the name Eurostar instead of Thalys is wise, Dutch marketing and brand expert Paul Moers wonders. “The annoying thing about a merger is that you cannot keep both brands. Thalys is a very well-known brand. There is a lot of emotion associated with it. With Thalys I think: a comfortable journey. Which brand evokes the most pleasure, fun? Isn’t that what life is all about?”

Eurostar is an emotionally weaker and less charged brand, thinks Moers, at least, from a Dutch perspective. “It’s a loss to let the Thalys name disappear.”

During the corona crisis, Thalys saw its passenger numbers fall sharply by 70 per cent, compared to 2019, when Thalys was still carrying 7.85 million passengers. The goal is to be above that number by 2023. Thalys aims to increase to 30 million passengers by 2030. “We are very ambitious. If we join forces, we can achieve our goals”, Gosselin said about the upcoming merger with Eurostar.