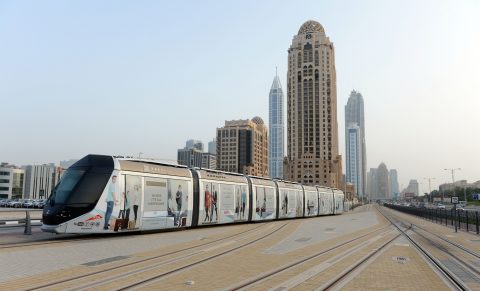 In the United Arab Emirates, Keolis started operations on the Dubai fully automated metro and tramway networks on 8 September.

Keolis began operating and maintaining the Dubai metro network and the city’s tramway network, as part of the contract awarded in January 2021 by the Dubai Transport Authority (RTA). The contract runs for at least 9 years, with three 2-year extension options.

When it opened in 2009, Dubai’s metro topped the list as the world’s longest automated rail system. Today, its length is surpassed by the automated system in Singapore, but the red line is still the longest driverless single metro line at 52.1 kilometres. Dubai Metro uses level-4 communications-based train control (CBTC) technology by Thales, reducing the interval between trains.

The metro and tram lines were previously operated by the British company Serco. The takeover of the two networks follows a seven-month transition period. 1,850 employees from Serco were transferred, retaining a majority of the workforce.

Worth 125 million euros per year, this contract is carried out by a joint venture Keolis-MHI. They will run all metro and tram network assets, from trains and control centres to stations and associated infrastructure. Also covered are operation and maintenance of the automated metro and fare systems, and full coordination and integration of Dubai’s metro, tram and other means of transport.

The Dubai Metro consists of two lines, a red and green one. They cover 90 kilometres in total with 53 stations. It has long been the longest automatic metro network in the world. On the lines run 79 Kinki Sharyo metro trains delivered by Mitsubishi, and 50 Metropolis trains built by Alstom.

“Dubai Metro currently constitutes the backbone of transportation systems in Dubai. It links vital areas and provides safe and smooth mobility for riders”, said Mattar Mohammed Al Tayer, Director-General of the RTA. “From the start of the passenger service in September 2009 up to the end of August 2021, the Dubai Metro operated more than three million trips transporting about 1.706 billion riders.”

The 10.6 kilometre long tram network was inaugurated in 2014. The tramway operates without a catenary, thus preserving the urban landscape, and circulates thanks to an underfloor power supply system. 11 of Alstom’s Citadis trams serve 11 stations in the city. They link two stations of the metro network, Dubai Marina and Jumeirah Lake Towers. Particular attention has been paid to passenger safety, with the stations of the network being equipped with platform screen doors as a first for trams worldwide.

Keolis has long been active in automatic metro systems, launching the Lille network in 1983. The company also operates the metro system in the United Kingdom, in London (Docklands Light Railway), as well as the tramway system in Melbourne, Australia.