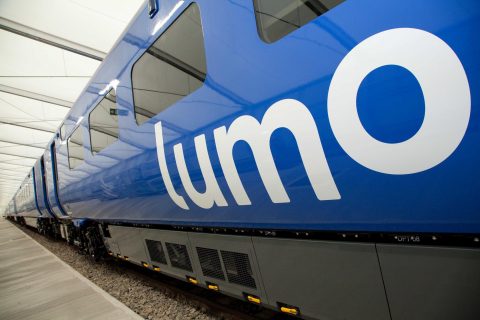 Despite the crisis and major changes in rail governance, Britain will see the arrival of a new operator called Lumo. Lumo will begin operations between London Kings Cross and Edinburgh on 25 October 2021, calling at the main stations of Stevenage, Newcastle and Morpeth.

The biggest shake-up in decades on the East Coast Main Line between London, Newcastle and Edinburgh is underway. That’s how the British press is greeting a newcomer to British railways. Lumo, the new train operator, plans to start operations from October between London and Edinburgh.

Behind Lumo is First Group, a private British group well known across the Channel and very active in public passenger transport, both in the UK and in North America. It is based in Aberdeen, Scotland. In April 2021, however, First Group announced the sale of its North American operations for nearly 3.9 billion euros to an investment fund.

The end-to-end journey between London and Edinburgh will take 4.5 hours. The new operator will run five trains a day, but the frequency will increase over time to a maximum of 10 services a day by early next year.

No subsidies are involved in this initiative. FirstGroup has invested 17.5 million euros in digital and IT infrastructure and 118 million euros in the purchase and maintenance of its five new Hitachi AT300 intercity trains. These short, five-cabin trains can carry 400 single-class passengers at up to 140 kilometres per hour. There is no on-board bar, but a catering service called Lumo Eats, a pre-order service that offers a wide selection of selected partners, many of whom are known for their sustainability.

In addition, 2.9 million euros has been invested in a training academy to develop staff and ensure customer service on board, making use of all the new technology available.

Helen Wylde, Managing Director of Lumo, said: “Travelling in the UK shouldn’t cost a fortune. Whatever your preferred mode of transport, we are likely to be more affordable and more environmentally friendly. We believe that everyone has the right to travel in style. We empower people to make truly affordable green travel choices without compromising on comfort.”

Lumo in effect aims to encourage travellers from other modes to switch to rail. Its trains are ergonomically designed for comfort and ease, allowing passengers to work or rest on their custom-designed seats, all of which are equipped with an adjustable table top, privacy nook and personal lighting.

As sustainable transport, Lumo aims to create more than 13 million additional passenger journeys over the next decade, helping to reduce carbon emissions by encouraging travellers to use electrically powered travel that is greener than planes or buses. It would contribute up to 290 million euros to the UK economy over 10 years.

Lumo, in the single-class ‘low fares’ category, is reminiscent of the successful RegioJet initiative in Central Europe. First Group is also taking on a major British rail line that has suffered several setbacks in recent years, including lower traffic and broken promises of work.