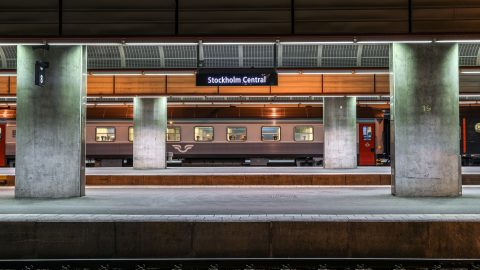 Swedish state railways SJ has won the procurement to run a new night train from Stockholm to Hamburg in Germany. Called SJ EuroNight, the night trains will be part of the network of European night trains which is growing and becoming increasingly popular again.

The first SJ night train to Hamburg is expected to departure from Stockholm on 1 August 2022. There will be one train per day in each direction. The overnight journey will take about 12 to 13 hours.

After running from Stockholm to Copenhagen, the night trains cross the Great and Little Belt Bridges in Denmark, and then continue towards Hamburg. The trains will have Swedish- and German-speaking staff. The exact times will not be clear until the train schedule is determined this autumn. According to the preliminary timetable, the night train will depart Stockholm early in the evening and arrive in Hamburg between six and seven in the morning. From Hamburg, the train departs after 21 hours and arrives in Stockholm at approximately ten the following morning.

In 2019, the Swedish Transport Administration Trafikverket was commissioned by the government to investigate the conditions for a new night train service with daily departures from Sweden to several European countries. The procurement is a result of an agreement between the government, the Center Party and the Liberals.

The night train from Stockholm to Berlin is not the only route that Trafikverket has procured. There is another one, from Malmö to the Belgian capital Brussels. However, Trafikverket says that no bids for the tenders have been received. The contract with SJ for the first route can be signed no earlier than 10 September, if it is not reviewed. It lasts for four years with the possibility of extension for another two years.

SJ is given overall responsibility that includes traffic operations, vehicle supply, ticket sales and marketing. However, driving night trains across the border into Europe requires cooperation. First of all, SJ’s Swedish carriages are too wide. Therefore, SJ’s main partner will be RDC (Railroad Development Corporation), which will provide carriages, staffing, as well as train driving in Germany. RDC Deutschland is a subsidiary of the family-owned Railroad Development Corporation in Pittsburgh, USA. In Germany, RDC currently runs night trains and car trains in Germany and Austria. SJ also collaborates with Danish Railways DSB for train driving in Denmark.

Not the first on the route

Railway undertaking Snälltåget also operates night train services on the route, namely from Stockholm to Berlin via Hamburg, during parts of the year. The company has been allocated capacity on the network for 124 days for 2021. With this as a starting point, the traffic of the additional night train is procured for 240 days (about eight months) per year. The cost of traffic for eight months, given that the procured traffic runs during the parts of the year when demand is judged to be the lowest, is estimated at 4 to 5 million euros (SEK 40-50 million) per year for the section from Stockholm to Padborg in Denmark, calculated Trafikverket.

The basis for the assignment has been that all train services should be operated on a commercial basis, but in addition Trafikverket has been tasked with procuring certain services that cannot be operated on a commercial basis. This government mandate is about supporting accessibility between different parts of Sweden or, as in this case, to Europe. Snälltåget voiced concerns about this earlier.

Snälltåget said earlier that the procurement raised a ‘significant risk that another operator could operate services with state aid from Sweden and Denmark’ in competition with its own overnight trains. A better approach would be to improve conditions for operating cross-border night train services in a way that would benefit all operators, such as lowering track access charges, simplifying the tax rules ‘in the same way as for air travel’ and providing a harmonised regulatory framework between countries, said the company.

According to an interrim report from Trafikverket, “the procured traffic will complement Snälltåget’s traffic to create travel opportunities with night trains all year round”. The Swedish Transport Administration says it has had contacts with Snälltåget and SJ, both during the autumn of 2020 and during the previous investigation into investigating the conditions for a night train service to Europe.