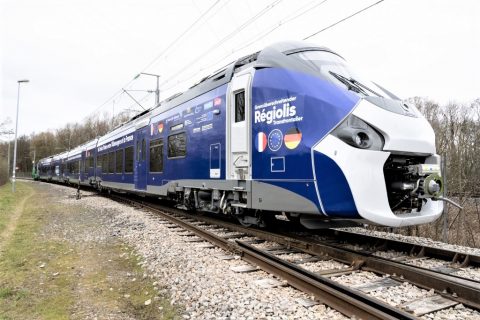 Grand Est region wants to connect with Germany by rail

The first Régiolis trains for French-German cross-border services were presented to elected representatives in Neustadt an der Weinstraße (Rheinland-Pfalz, Germany) in June. The French Grand Est region wants to connect with its German neighbours by means of seven lines from 2024.

Grand Est is one of the four French regions that want to be offensive with their regional railway policy. On 24 January 2020, the vice-president of the region Grand Est signed an agreement with the three German border states Baden-Württemberg, Rheinland-Pfalz and Saarland. They agreed to expand rail passenger transport between France and Germany. The signing of this agreement made it possible to apply for a financing by the European Union via the ERDF funds of the Interreg Upper Rhine program for an amount of three million euros.

Grand Est region and the three german states want to start a tender for a single operator with a one kind of rolling stock on both sides of the border. The aim is to avoid repeating the example of the Léman-Express around Geneva, where French state railways SNCF and Swiss Railways SBB did not reach a joint agreement about the rolling stock.

This agreement is intended to improve services on existing lines, but also to create new links between the towns of the Grand Est and those on the other side of the Rhine. Seven railway lines will see their operation improved or will be opened by 2025 in order to further link our territories by direct cross-border connections, states the Region:

The tender is for a volume of 4.3 million train kilometres in France and 2.1 million in Germany. The selected operator will begin operations on 8 December 2024. It will be responsible for the routine, preventive and corrective maintenance of the rolling stock provided by the Grand Est region, as well as for ticket sales in Germany, which will require bilingual staff.

The region Grand Est will invest nearly 376 million euros in the construction of 30 cross-border Régiolis trainsets, from the Coradia family manufactured by Alstom. These trains are in service with operators in Germany, Denmark, the Netherlands, France, Finland, Luxembourg, Sweden and the UK in various configurations.

The order from the Grand Est region dates from October 2019. It concerns 30 dual-mode diesel-electric Coradia Polyvalent trainsets built by Alstom. The trains will be dual voltage 15kV 16.7Hz for Germany, and 25kV 50Hz for France. They will be equipped with national safety systems KVB and PZB but will be also equipped with the European system ERTMS.

With four cars, these trainsets will be capable of 160 kilometres per hour on the sections that allow it. Unlike the  TERs of SNCF, which only have second class, the “Régiolis TFA” (‘Transfrontalier France Allemagne’) will keep the first class to be in line with German regional trains.

The first Régiolis TFA has already left Alstom’s Reichshoffen plant in Alsace in May 2021 to reach the DB Systemtechnik test centre in Minden. The Régiolis will then be transferred to the Velim test centre in the Czech Republic for traction, braking and acoustic tests as well as electromagnetic stress checks.

It will then have to undergo certification, via Certifer in France and AEBT in Germany. There, the compliance with the technical specifications for interoperability will be checked. They will also check various other mandatory standards, such as those concerning accessibility for people with reduced mobility.

This is a rather rare example of cross-border rail revitalisation and it will be interesting to follow the rail policy of the Grand Est region.