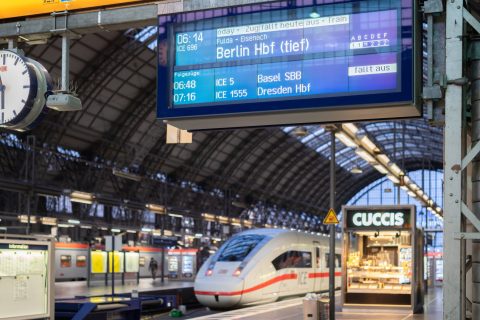 The strike of the union of German train drivers (GDL) has started and is having a major impact on German train traffic. In long-distance traffic, around 25 percent of trains run nationwide. There are strong regional differences in local traffic.

Many stations in Germany have trains standing still and passengers confused as to how to make their trip on Wednesday morning. ‘Train cancelled’ can be often seen on display signs all over the country. Deutsche Bahn asked travellers to postpone journeys that are not urgently needed. Because of the nationwide strike, an increased volume of cars on the roads is to be expected.

Regional disruptions mainly in the east

The long-distance and local trains of Deutsche Bahn run according to a replacement schedule. In regional and S-Bahn traffic, the number of trains offered varies greatly depending on the region. The main disruptions due to strikes are in eastern Germany and in some metropolitan regions. ​​For freight transport, the strike already started Tuesday afternoon, and the strikes are due to end on Friday night.

All long-distance tickets that have already been booked for routes affected by the GDL strike from August 11th to August 13th will remain valid and can be used flexibly up to and including August 20th. Tickets can also be refunded free of charge.

DB says it chose to offer a greatly reduced, but reliable transport service of around 25 percent of the long-distance trains. Competitors of Deutsche Bahn are not on strike. They have considerable market shares in regional and freight transport.

The train drivers’ union is calling for wage increases such as those in the public sector of around 3.2 percent and a significant corona bonus in the current year. Deutsche Bahn has also offered this, but there is disagreement about when the wage increases would take effect. In addition, GDL wants a one-time bonus of 600 euros for the staff. Unlike the larger railway and transport union (EVG), it does not want to accept a zero round in salaries this year.

The passenger association Pro Bahn criticises the way passengers are dealt with in tariff disputes. In the current collective bargaining conflict between Deutsche Bahn and the Union of German Locomotive Drivers (GDL), passengers are largely left in the dark about the effects they have to be prepared for.

Pro Bahn calls on GDL and Deutsche Bahn to sit down at the negotiating table again and to carry out an arbitration. “At the moment we get the impression that Deutsche Bahn and GDL first have to agree on which perceived reality to negotiate. If you read the press releases on both sides, you get an impression like in the US election campaign in 2016″, complains Lukas Iffländer, Deputy Federal Chairman of the association. “From our point of view, it is questionable whether both sides can find their way back together without external help.”