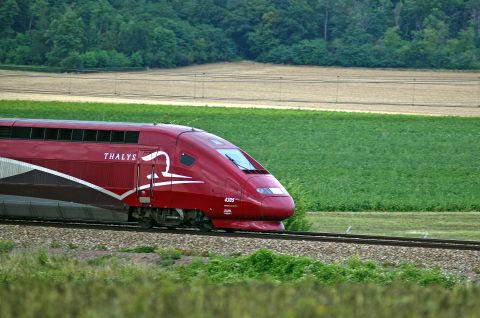 25th anniversary of Thalys: how did it start?

Happy birthday to Thalys! This Wednesday, 2 June, marks the 25th anniversary of the launch of the TGV Thalys. On 2 June 1996, the TGV replaced all conventional trains between Paris, Brussels and Amsterdam, and improved the rail links between the cities considerably.

Since the 1980s, a project for an international high-speed train had been in the making. In October 1987, a political decision in Brussels was made to build a high-speed network between France and northern Europe, including the Netherlands, Germany and the UK.

In the Netherlands, the project presented to the Dutch parliament in 1991 was first rejected. This was before the HSL-Zuid was approved in 1996 as a major project, and an agreement was reached with Belgium on a route via Breda, and not via Roosendaal. Germany, on the other hand, did not opt for a new line between Aachen and Cologne, but for a renovated track section at 250 kilometres per hour only between Duren and Cologne.

Before the inauguration date in 1996, traffic between Paris and the Belgium and the Netherlands, as well as to Cologne was carried out by pulled trains. Mostly French CC40100 or Belgian 15, 16 and 18 series interoperable locomotives were used. In the mid-1990s, up to twelve pairs of trains ran between Paris and Brussels via Mons. Six of which continued their journey toward the Netherlands via Roosendaal, Rotterdam, The Hague and Amsterdam. Another handful of trains ran along the Walloon route in Belgium to Charleroi, Namur and Liège, and then on to Aachen and Cologne.

On Sunday 2 June 1996, all trains between Paris, Brussels and Amsterdam were switched to TGV, while the high-speed network was far from complete, including in Belgium. The Thalys only ran four times a day to Amsterdam and Cologne, but much more between Brussels and Paris. All these trains were operated with Alstom TGV trains, similar to those used by SNCF on its own network, because at the time there was no other choice. The ICEs that Siemens built for Deutsche Bahn were only designed for Germany. 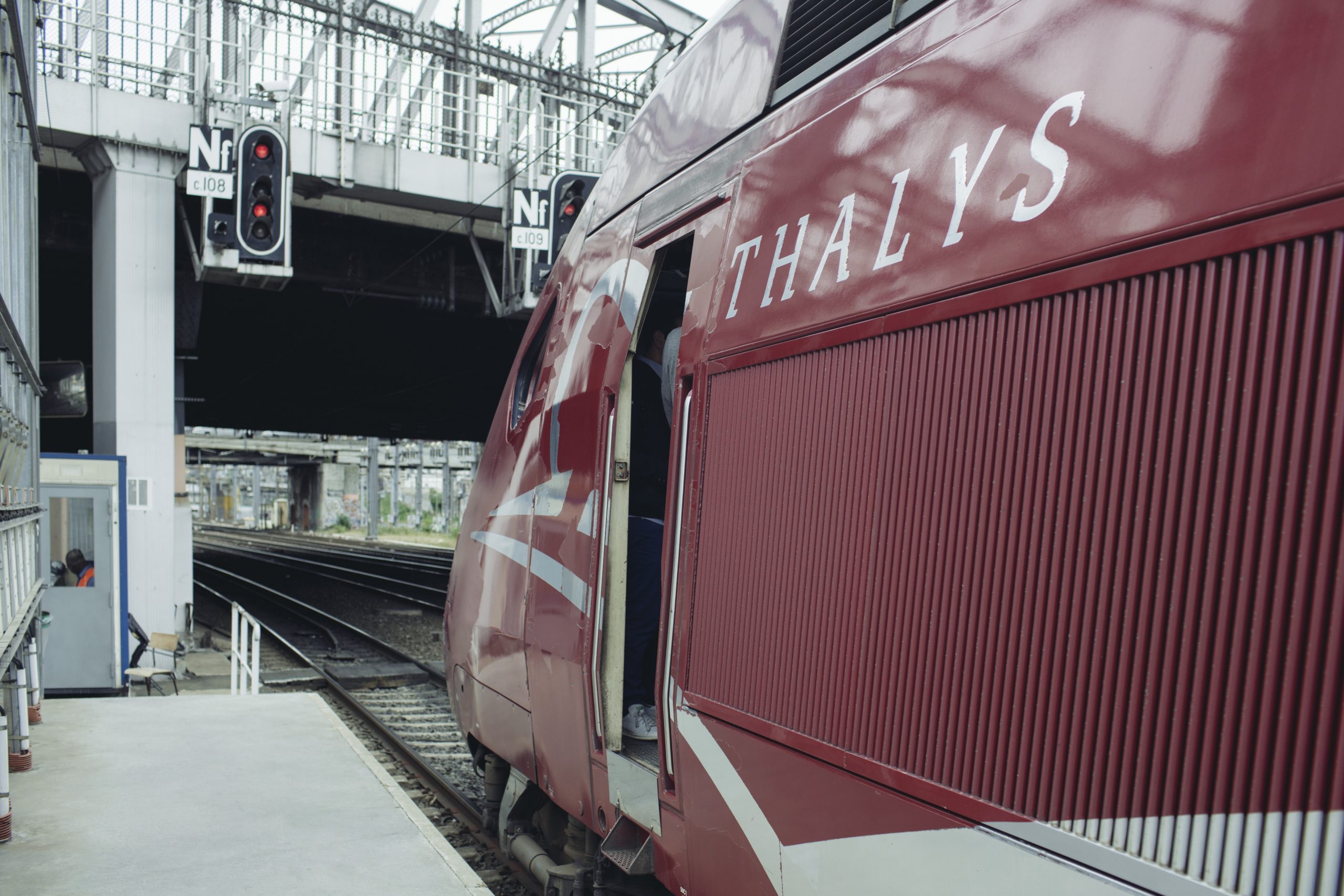 Full opening of the high-speed network

The TGV service was gradually expanded to its current state. In 2019, there were fourteen pairs of Thalys trains between Brussels and Amsterdam and five pairs between Brussels and Cologne, most extended to Essen or Dortmund. All the traffic is managed with 26 TGV trains from the manufacturer Alstom. Up to this day, Thalys has had no plans to renew its rolling stock. 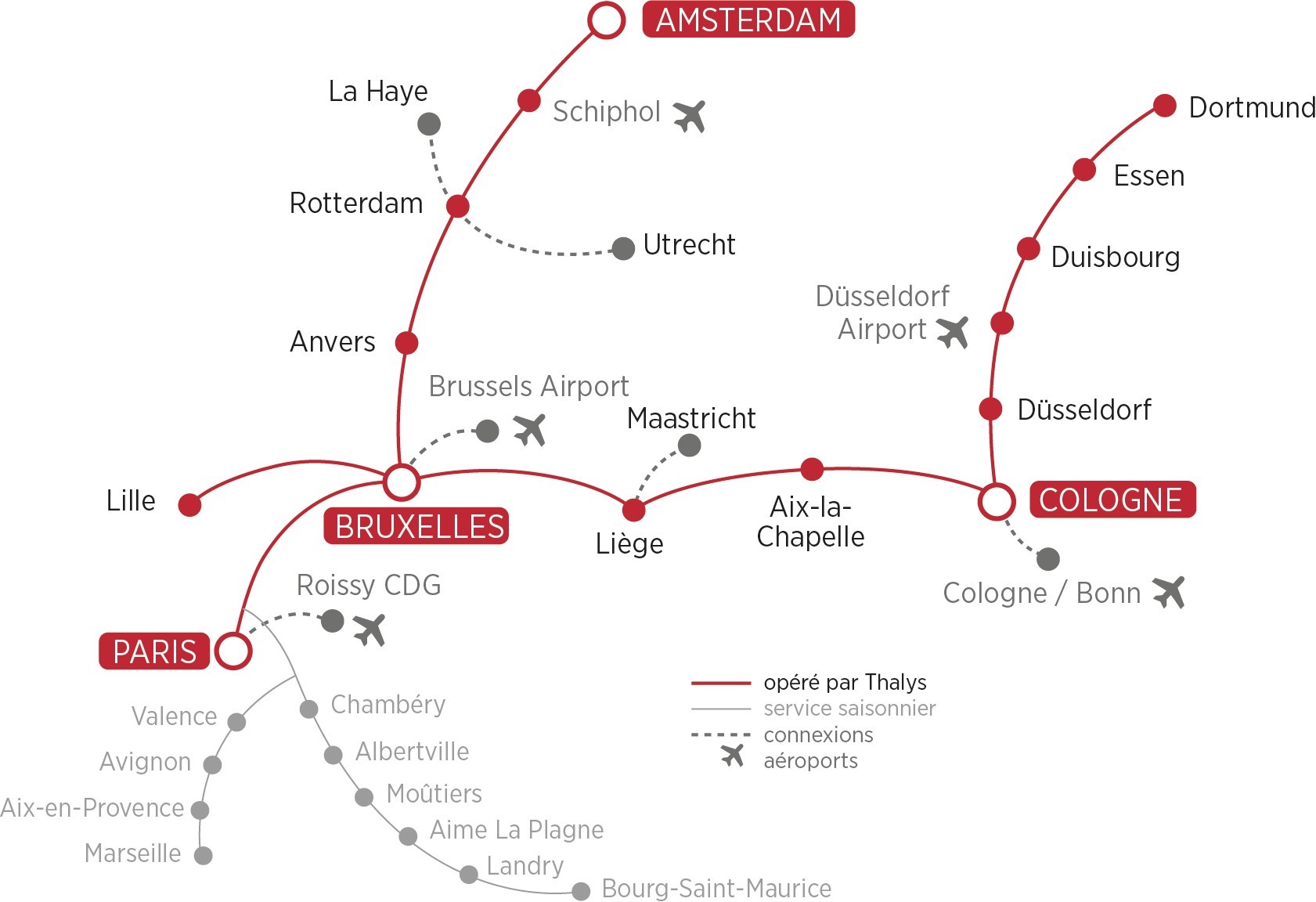 In April 2016, Thalys launched a service called “IZY”, with only one return trip per day between Brussels and Paris, in order to take shares in the growing buses and carpooling market. This TGV leaves the high-speed network near Arras, France, and runs on the classic French network until Paris.

In 2019, the last ‘normal’ year of reference, Thalys had over 7.5 million passengers. In addition, plans for a merger with Eurostar, which operates to and from London, came to light. This project has been delayed for the moment. Thalys, which had to face a severe drop in traffic due to the pandemic, has secured a loan totalling 120 million euros from five banks in order to ensure its survival. “The transaction secures the future of Thalys,” said the company on the financing agreement.

Thalys’ 25th anniversary is therefore taking place in a difficult context, but also with a gradual resumption of train operations and the summer season ahead.