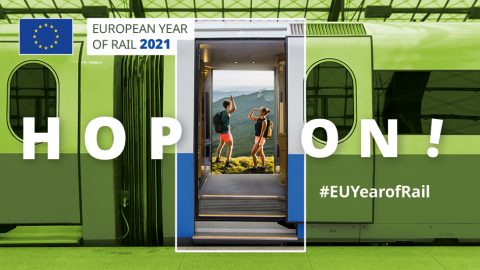 The Connecting Europe Express, one of the European Year of Rail 2021’s most emblematic initiatives, was presented on Monday during the official European Year of Rail kick-off conference, organised in cooperation with the Portuguese Presidency of the Council of the EU and streamed at RailTech Europe. The event took place on the eve of an informal meeting of EU transport ministers focusing on different ways to accelerate a modal shift to rail.

As of September, the Connecting Europe Express will travel across the EU and stop in most European capitals to promote the many benefits of rail – for passengers, freight and the environment.  The project will also raise awareness of the importance of financing sustainable infrastructure such as rail, and EU support for such investment, including through the recently agreed new Connecting Europe Facility (CEF), worth 33.7 billion euros, as part of the next long-term EU budget 2021-2027. The train’s journey is possible thanks to good cooperation between European rail operators and infrastructure managers.

Bringing together the rail sector

Commissioner for Transport Adina Vălean said: “The Connecting Europe Express will be a real, tangible example of the power of rail to connect. At each of the almost 40 stops, events will bring together the rail sector at large, as well as civil society organisations, local and regional authorities, and the wider public, to discuss the benefits of rail, as well as what still has to be done so that rail can become the number one option for passengers and business.”

Strong efforts to further integrate and modernise the European railway network are key to rail playing its decisive role in driving a modal shift – that is to say, to encourage more people and businesses to use rail as one way in which to decarbonise transport. This would help the EU meet its ambitious carbon-neutrality objectives, as set out in the EU Green Deal and the European Commission’s Sustainable and Smart Mobility Strategy. This potential is also why rail has such a central place within the EU’s Trans-European Transport Network (TEN-T) policy.

The European Commission is teaming up with partners at EU and national level to explore ways to encourage the use of rail by both citizens and businesses, and to contribute to the EU Green Deal goal of becoming climate-neutral by 2050. All events and other activities planned at local level are going to take into account local COVID-19 measures.

The Connecting Europe Express is unique in many ways. For example, railway companies from different EU Member States are providing rolling stock to configure this train. Coordinated by the Community of European Railway and Infrastructure Managers (CER), the project will be run not only in cooperation with European rail operators, but also infrastructure managers.

CER Chair and CEO of Austrian Federal Railways Andreas Matthä emphasised the significance of the joint project: “The Connecting Europe Express shows a strong commitment of the European Union and the European Member States reflecting the importance of the railway sector. Only by consistently shifting freight traffic to rail and expanding international long-distance passenger rail services will Europe be able to achieve its climate targets and make the European Green Deal an overall success.”

Modern railways are more relevant than ever for our sustainable and digital mobility transformation, and for regaining passengers’ trust in collective transport; this has been severely hit by the coronavirus pandemic. Rail is not only sustainable: it is also safe and innovative; it connects people, cities and regions all across the European Union. It also has a strong European dimension: the EU has one of the most dense railway networks worldwide.

European funding reflects rail’s key role for the future of transport. In the period 2014-2020, CEF Transport contributed to the decarbonisation of the European economy by investing heavily in environmentally friendly transport modes, including 266 railway actions across the EU. The CEF funding allocated to railway actions accounts for 16.3 billion euros, 72 percent of the total CEF Transport funding.