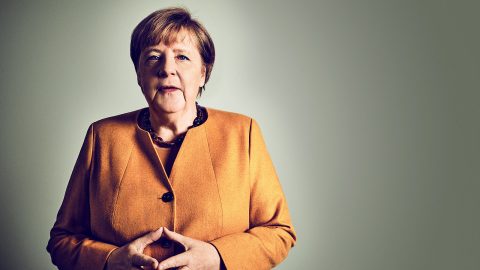 “Rail plays a special role in achieving our climate protection goals. We want more people to switch from cars or planes to trains and more goods to be transported by rail”, says German Chancellor Angela Merkel in an interview with Deutsche Bahn magazine DB Mobil. “This requires a modern rail network and improved services.”

At the start of the European Year of Rail, German Chancellor Angela Merkel talks about the importance of rail in the pandemic and for achieving the climate goals. To the question what the German Federal Government is contributing to the Year of Rail, Merkel says Germany is investing 86 billion euros over the next ten years to maintain and modernize the rail network.

“With the Master Plan for Rail Traffic, the course is set for a Germany-wide coordinated timetable, more goods on the rails, innovations and digitalisation, as well as improved noise and climate protection.” That does not end at national borders, together with the expansion of the trans-European networks, Germany wants to make rail attractive for everyone in Europe.

The backbone of climate-friendly mobility

Angela Merkel is Chancellor since 2005, and has announced that she will resign this year when the legislature expires. For this year, Merkel says that there there needs to be invested in rail digitalisation and new innovations. “The pandemic has made it clear that we need to put even more effort into digitalisation”, says the Chancellor. Large strategic projects such as battery cell production, hydrogen technology and the energy transition should also be promoted. “Without such innovations, it will not be possible to halt climate change and at the same time remain economically successful.”

“The fact that trains run and the movement of goods flows is of great importance to our society – the corona pandemic shows us that once again. During this time, Deutsche Bahn employees are doing a tremendous amount for our common good, and I would like to extend my heartfelt thanks to everyone involved.”  She appreciates that Deutsche Bahn brings professionals to work safely and maintains the necessary supply chains. “Rail transport is and will remain the backbone of climate-friendly mobility and logistics. Only with rail will we achieve our climate goals.”

What could the railway do better?

In order for even more passengers to switch from airplanes to trains, it is important to shorten travel times and expand the rail network more quickly, according to Merkel. She also mentions there is still room for improvement in digitalisation. “Signal and communication technology is currently lagging behind the technical possibilities. As the railway itself has calculated, around 20 percent more traffic could be handled in the network through more efficient use of digital solutions.” This would also contribute to more punctuality, according to the German Chancellor.