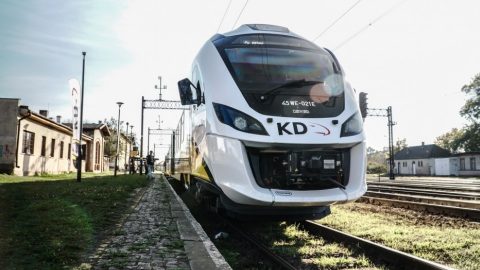 Koleje Dolnośląskie is the first regional railway operator in Poland that has request stops in its schedule. Two halts were examined during the nine-month tests. Now the train company is working on extending this experience to other locations in Lower Silesian Voivodeship.

Request stops are common for bus services in big cities. Koleje Dolnośląskie, a railway operator that runs in Lower Silesian Voivodeship of Poland, decided to implement this option for regional train connections. In December 2019 it started a dedicated pilot project. Two halts were added to the company’s timetable as request stops. They are Nowa Wieś Legnicka and Krzyżowa located on the Legnica – Katowice railway line.

In order to carry out the experiment, Koleje Dolnośląskie joined forces with PKP PLK, Poland’s rail infrastructure manager. The latter equipped two stops with special signs that inform passengers on the request option in Polish and English. These signs were installed directly on the platforms. Koleje Dolnośląskie, in its turn, instructed the personnel about the new service.

In practice, the company’s train drivers stop the vehicles at the two halts on several occasions. First, if they see a passenger or some passengers staying at the platform. Second, if a conductor reports to a train driver about the passengers who wish to take off the train at Nowa Wieś Legnicka or Krzyżowa. Third, the train drivers must stop the vehicles at the mentioned halts at night or in case of bad weather conditions. If the weather is fine, the trains are stopped only on a passenger’s request.

Since launching the experiment, the trains stopped on request at Krzyżowa halt in 31 per cent of journeys and at Nowa Wieś Legnicka in 14 per cent of journeys. Only in around 4 per cent of cases, the trains stopped unnecessarily, for instance, because someone appeared at the station but did not really want to travel. These results were estimated as successful by Damian Stawikowski, CEO of Koleje Dolnośląskie: “Our idea proved successful in practice. That is why we intend to continue and develop this project”. The railway operator has already chosen several other halts to introduce this option in December when the new timetable will enter into force. Koleje Dolnośląskie is being currently discussed this issue with PKP PLK.

Koleje Dolnośląskie also expects to attract more customers by using the request-stop service. To this end, some trains will be equipped with a notification system for the passengers to be able to make a request to a driver. In addition, this service creates a reliable opportunity for passengers who plan to travel to nearby towns. As of today, the request-stop service is available at the mentioned two halts on a regular basis. According to the current timetable, there are nine trains per day stopping on request at Nowa Wieś Legnicka halt and 12 trains at Krzyżowa halt.