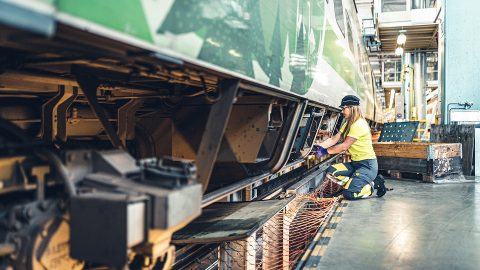 Women account for 21.41 per cent of the railway staff in Europe. Such a conclusion has been made by the Community of European Railway and Infrastructure Companies (CER) and the European Transport Workers’ Federation (ETF) after analysing data of 28 railway companies from 21 European countries.

The highest rate of 40 per cent was documented at Transdev Sverige in Sweden while the lowest rate of 6.9 per cent was recorded at CFL Cargo in Luxembourg. CER as the association of railway employers and ETF that represents employees have been publishing the joint report “On the Development of women’s employment in the European railway sector” since 2013. During this period, the associations have been recording the increase in the share of women working in the rail sector. The report’s latest edition that has been recently unveiled also confirms this ‘positive trend’.

“The proportion of women’s employment in European railway companies is steadily rising for years and so is the participation of different companies in the questionnaire. The average increase in the proportion of women in the years 2017 to 2018 is at 0.2 per cent. The highest increase between 2017 and 2018 is clearly seen in Italy (FS Group) with 1.1 per cent (from 15.3 to 16.4 per cent),” the document reads. At the same time, the decline of this percentage was documented in four railway companies: DSB (-0.7 per cent), VR Group (-0.4 per cent), GySEV (-0.4 per cent) and Slovenske železnice (-0.1 per cent).

From the perspective of professions, the data looks slightly different. “Data of employees in total and in different professions show an increase of women’s share among locomotive drivers with +0.3 per cent, onboard personnel with +1.5 per cent and a decrease in traffic management with -1.5 per cent,” the report reads. Meanwhile, each country has its own specificity in terms of professions. For instance, Belgium (HR Rail, NMBS/SNCB, Infrabel), Switzerland (SBB and SBB Cargo) and Germany (Deutsche Bahn) have the highest rate of the female locomotive drivers: 4.7, 3.8 and 3.7 per cent respectively. Slovenia (Slovenske železnice) and Slovakia (ZSSK, ZSSK Cargo) have the lowest rate: 0.3 and 01. per cent respectively.

Meanwhile, the quiet high share of women was recorded among on-board and traffic management personnel. The average share of female on-board staff is 37.3 per cent. In this regard, Slovakia and Germany show the best results (49 and 47.3 per cent). As for traffic management personnel, Lithuania has the highest rate (62.3 per cent). At the same time, Belgium and Italy demonstrate the highest increase of women’s share (+8 and +6.7 per cent).

The entire report is available here.