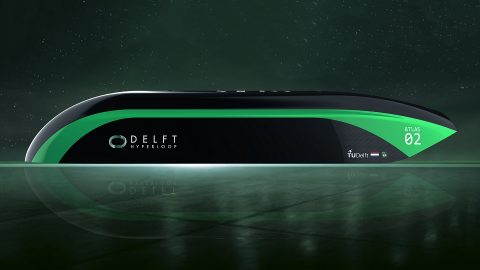 The draft of the new Hyperloop capsule was presented in Delft’s Museum Prinsenhof. The TU Delft Technology Hyperloop Team will not only participate in the race but also research the feasibility of a hyperloop system. “The Delft Hyperloop team also focuses on issues concerning security, economic potential, infrastructure and technology necessary to build a hyperloop system”, the team’s captain Rieneke van Noort said.

The new pod is considered by the inventors as faster than its predecessor. The TU Delft team expects to break the current world record of 467 kilometres per hour on a one-kilometre track set by the WARR Hyperloop team from Munich. “The pod has been designed in that way to locate all the components compactly that makes it extremely light and, therefore, better for acceleration and slowing down. The pod has a power similar to a tank but weighs less than a motorbike. In this way, the high speed can be achieved”, the team’s chief engineer Elja Ebbens noted.

The young engineering crew consists of 39 students. It has been participating in the SpaceX Hyperloop Pod Competition since 2016. In 2017, the TU Delft Hyperloop crew took the first prize. The student team achieved second place in 2016 and 2018 when it was outrun by the Massachusetts Institute of Technology’s team (USA) and the WARR Hyperloop team (Germany) respectively.