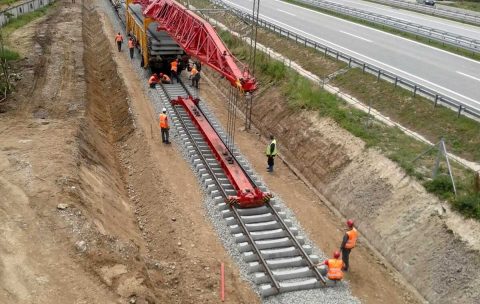 The Serbian government wants to further modernize the country’s railway infrastructure. For this purpose, it intends to loan 440 million Euros. Russia is considered as a potential borrower.

Serbian Deputy Prime Minister and Minister of Construction, Transport and Infrastructure Zorana Mihajlovic met with the First Deputy Chief Executive Officer of Russian Railways (RZD) Aleksandr Misharin to discuss the modernization of railway infrastructure of her country. Serbia is looking for possible investors for several railway projects valued 440 million Euros and it requested a Russian party to finance them. These projects will boost passenger and freight traffic on the Serbian railway network.

“Today we are talking about new projects, including the construction of a new dispatch centre, continuing the reconstruction of the Bar railway and the electrification works on the Stara Pazova – Novi Sad section. The value of these projects is worth around 440 million Euros and we will continue to talk in terms of potential new loans,” said Zorana Mihajlovic after the meeting being held on October 12th in Belgrade.

Russia is taking an active part in modernisation of Serbian railway infrastructure both as investor and contractor. In May 2013, Serbian Railways (ZS) and RZD International, a subsidiary of RZD, signed the agreement with a value of 820 million Euros. According to the document, RZD International should modernize 370 kilometres of main lines across Serbia, including a 200-kilometre section of the Belgrade – Bar line, electrify the 16-kilometre section of the Belgrade – Panchevo line as well as supply 27 diesel-trains produced by Metrovagonmash. Moreover, Russian government granted Serbia loan of close to 700 million Euros to finance these projects.

RZD International started its activities in Serbia on March 2014. Today most of the obligations have been already fulfilled. “Serbia has already used almost the entire Russian loan and that money was invested in the modernization of X railway corridor’s section and the Bar railway line, meanwhile we are working currently on the Stara Pazova – Novi Sad section, which is a part of the Belgrade – Budapest high-speed line,” noted Zorana Mihajlovic.

The longest line that will be modernized next year is the Niš – Zaječar railway with a length of 108 kilometres in the southeastern part of the country. It connects Niš, the third-largest city in Serbia, with adjacent communities. The length of other sections varies between 6 and 84 kilometres. They are the Lapovo – Kraljevo (84 kilometres), Markovac – Resavica (53 kilometres), Subotica – Senta (38.5 kilometres), Kumane – Banatsko Miloševo line (28.5 kilometres), Kikinda – MSK Kikinda (6 kilometres) lines.