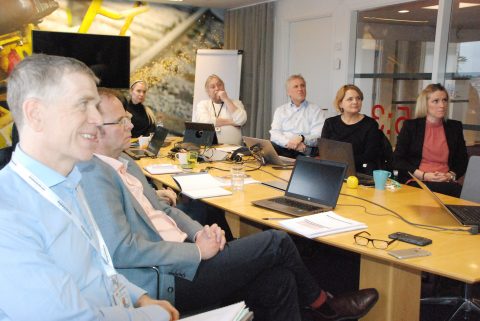 Strukton Sweden strives to have 25 per cent of all job positions filled by women by 2020. “Half the population of Sweden is female, so why can’t the rail industry reflect that?” says Peter Arozenius, Quality, Environment and Work Environment Manager for the Swedish branch of the railway company. As part of his job function, he is responsible for making the company more appealing to future female employees.

The stereotypical image of the all-male rail industry is slowly beginning to change, because increasingly, companies are actively engaging potential female employees. As is the case with Strukton in Sweden. The Swedish government wants to ensure that 25 per cent of all employees in construction are female by 2030. Strukton in Sweden strives to reach that goal 10 years earlier.

“That is because of our CEO, Robert Röder. He made the conscious commitment to employ more women in our company”, says the Work Environment Manager. One of the results of this push for more gender diversity is visible in the management team. Previously, this team featured eight people, seven of whom are male. Thanks to Röder, the team now consists of five female and six male managers.

That is not the only way Strukton hopes to attract more women. When attracting and training new supervisors, they actively look for women. “You cannot wait for them to come to you”, Arozenius says. He gives the application process as an example: “If not enough women apply, look at the process itself. Because there are many men in the rail industry, men will usually recommend other men. So if the process is dependent on recommendations, you will always attract more male applicants.”

Unfortunately, Strukton is unable to influence the number of women in other positions in the company, Arozenius says. “For executive roles, it is often more difficult to find women. When it comes to that, we are dependent on the school system and the number of girls that choose technical studies. We hope that more and more girls will apply for technical studies in the future, especially when they see that it’s possible to work in top positions in the rail industry.”

Strukton hopes to improve the work environment by increasing the number of female employees and that this, in turn, will lead to more diversity. “We want to create a better work environment. We will make sure that everybody, regardless of religion, skin color or gender, will be respected and has the freedom to be themselves. This way, our company becomes a truer reflection of society. And hopefully this will attract more women in other positions. We don’t want to be an old-fashioned company that consists of entirely out of white men. We like to think that Strukton attracts the best people.”

This improves the company. “We need the best people to make Strukton successful, regardless of gender. We benefit from their experience and knowledge.”

There are more possibilities now to employ women. The rail sector still mostly consists of men, according to the manager. “Back when most of the railways were being build, that required a lot of physical strength. I often compare it to the construction sector: there are not a lot of female bricklayers.” Nowadays, however, most of the work can be done on a computer. “And that does not require physical strength.”

Arozonius says that he does not doubt that certain male colleagues had difficulty adapting to the new situation. “Of course certain colleagues wanted everything to stay the same. It would be naive to say otherwise.”

But Strukton Sweden won’t let that keep that from making the change regardless: “You have to start somewhere. You cannot just keep talking about it.” The message for other rail companies and other Strukton departments is clear. “I would say: don’t be afraid. Be brave and take a chance. Just go for it!”