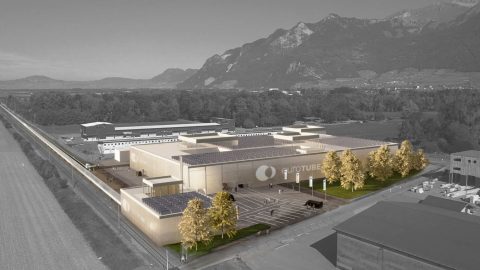 Swiss EuroTube to experiment with hyperloop tech for moving goods

The EuroTube foundation, a Swiss non-profit research organisation for the development of vacuum transport technology, will launch two test tracks to apply hyperloop technology to the transportation of goods via rail. The two test tracks are named DemoTube and AlphaTube and will be located in Dubendorf and Collombey-Murazboth, Switzerland.

When it comes to rail freight, the DemoTube and AlphaTube will be suitable for tests on freight vehicles that transport pallets, as a spokesperson from EuroTube told RailFreight.com. The AlphaTube project will also include tests concerning loading and unloading cargo and mechanisms for the safe transport of goods.

What’s in it for rail freight?

AlphaTube will inquire on how to adapt the acceleration and hooking technologies for freight vehicles, which are usually heavier than passengers. The EuroTube spokesperson specifies some of the challenges that lie ahead. “As for every other multimodal transport system, ensuring efficient loading and unloading procedures is essential to make this technology attractive”, they said.

Another main challenge of hyperloop is that vehicles have to switch from a pressurised environment to a vacuum. One of the ideas brought up by the spokesperson would be telescopic boarding piers. These piers would link the back of the vehicles with the pressurised environment, enabling the process of loading the vehicle without it leaving the tube.

Another important challenge is to incorporate the transport of TEUs and FEUs in hyperloop. EuroTube thinks that one of the solutions would be tubes with a larger diameter, 4,4 metres, which could host vehicles suitable for such containers. Since freight wagons are heavier and more voluminous, the infrastructure would need to be designed to meet these requirements.

DemoTube will be used to test all the new hyperloop technology at one single location. The spokesperson added that the focus will be on building and installing watertight tubes and airlocks for environments with different pressures. Moreover, there will be tests on vacuum pumps, safety mechanisms, and electromagnetic acceleration.

The AlphaTube will be longer than its sister in Dubendorf, reaching 3,1 kilometres in length. The test track will be located in the west of the country, in Collombey-Muraz, near the border with France. There is no date for the launch of AlphaTube yet. The EuroTube’s spokesperson said that assembling the track should take roughly two years. However, the process cannot start until the building permit is granted. The association is currently taking care of bureaucratic procedures to unlock the permit.

AlphaTube will be somewhat of an extended version of DemoTube since the tubes will have the same diameter. This track will be used to test high-speed vehicles, up to 900 km/h. The length of the track was in fact calculated to allow for the safe acceleration and braking of the vehicles.

In addition, AlphaTube will make it possible to test vehicle levitation, how to maintain a high cruising speed, and the necessary amount of electric power to accelerate. Finally, AlphaTube will also implement tests for the integration of solar panels placed on top of the infrastructure.

Hyperloop technology needs three elements to work: tubes, pods, and terminals. Pods are coaches that are pressurized at atmospheric pressure and run inside the tubes substantially free of air resistance or friction, thanks to magnetic propulsion. A hyperloop system would be based on demand, rather than a fixed schedule. However, as for all maglev systems, a brand new infrastructure would be necessary to implement hyperloop technology. One of the most vocal supporters of hyperloop technology is Elon Musk, who, in 2012, claimed that it could become the fifth mode of transport.

In the mean time, however, nothing should prevent, for the now needed shift, at the “Old Railway”?
Simply by upgrading, with short notice, added capacity and utilisation of existing, all over, at infrastructure and assets, will be seen.
The obvious, shall not be disregarded?
(Defects, at wheels -and rail – are symptoms…
Electrification, optimal 100 years ago, no longer is, etc., etc.)
Already, current railway standards, are not optimal – and “investments”, now made – are “cementing”…