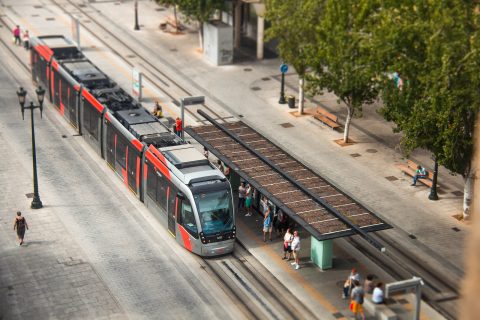 ‘Rail is the perfect use case for assistance and autonomous technology’

The test programme is ongoing in the Spanish city of Zaragoza, where in the coming five months the two companies will test intelligent collision avoidance technologies and advanced driver-assistance systems (ADAS) features. CAF and OTIV are carrying out their project as part of the Technologies for the Autonomous Rail Operation (TAURO) programme under the umbrella of the Europe’s Rail Joint Undertaking (ERJU). The local operator Tranvia de Zaragoza is on board as a partner.

“CAF and OTIV have the common goal of ensuring safe and efficient operation of trams. ADAS can contribute greatly in that regard”, De Smet says. “In a first phase, an ADAS system supports drivers in avoiding collisions between the tram and other participants to traffic. Additionally, this technology is one of the essential building blocks for Automatic Train Operation (ATO) in urban environments, which in turn can facilitate cost savings and efficiency gains in urban rail .”

The cooperation came about following a successful project OTIV completed in the Netherlands for Dutch Railways (NS) and infrastructure manager ProRail. There, OTIV focussed on assistance systems for passenger train shunting, deploying its sensor suite for image recognition and sensor fusion. As CAF is collaborating closely with NS on ATO, including regular tests on ATO over ATB, the Belgian start-up appeared on their radar.

“In mobility, there is a general trend towards ADAS and autonomous driving technologies. OEMs and operators are essentially on the lookout for parties with certain expertise in that field. Our expertise is perception technology, which is an important building block for continued development and eventual rollout of ADAS and ATO-related technologies”, adds Van Damme.

“The technology has to be able to recognise all potential danger, which requires state-of-the-art machine learning algorithms to create a reliable image of the environment. We also have to consider which sensors (incl. lidar, camera and radar) are most suited for this type of project, and where to install those,” says De Smet.
The project in the urban setting of Zaragoza is also different from the company’s earlier projects in that this new environment opens up the road to additional validation steps of the technology. “This time around, the project is less experimental; the tram is running in regular operations , collecting real-life data. This allows the system to learn from every mile driven”.

As any car manufacturer will tell you, getting ADAS to function smoothly and perform predictably, is no small feat. In automotive, the deployment at scale of self-driving technology still has a long way to go, especially in an urban setting. But that is exactly why railway vehicles are so suited for ADAS and ATO technologies, De Smet notes.

“Rail is the perfect use case for assistance and autonomous technology. These vehicles run on tracks, greatly reducing the degree of freedom compared to cars or trucks. In the case of trams, the vehicle can do only two things: stop or move forward. Moreover, at OTIV we’re convinced that these technologies are essential elements in our efforts to increase the modal share of rail. Building the mobility system of the future requires a backbone: a transport mode capable of transporting high volumes (of both people and goods), in a fast, cost-efficient and sustainable manner. Rail is the perfect candidate for this task, on all levels: from an international network of freight rail to the local urban tram network. Thanks to assisted and autonomous solutions, rail will be able to take this role and guarantee cost efficiency, flexibility and safe operations”

True and equally, obvious it should be, that half of LCC…, incl. current frequent, grinding, etc., etc., not at all is automatic, neither “predictable”. (Just recording of damages, those anticipated, is automatic.)
Even worse, disturbings related old standards, plaguing as well clients, as Industry, is obstructing the requested shift to a safer, a timely, new, and autonomous technology.
(For making mere Industry autonomous…, first basics, Shift to a New Old Railway, a robust, a resilient!)