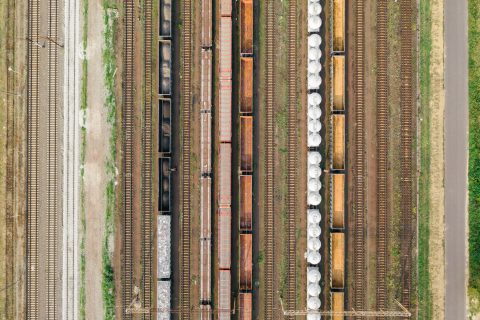 As railways are viewed as key to sustainable mobility, the increase of rail’s modal share for both passenger and freight transport will cause congestion problems on many national and urban networks. Virtual Coupling promises to be a game-changer technology for accommodating more trains and increasing service flexibility. Nevertheless, gaps in technological knowhow and regulations are slowing down its adoption.

Virtual coupling is a next-generation signalling concept that, as the name implies, aims at “virtually” coupling trains together when they travel on the same route. This means that distance between trains would shift from an absolute braking distance to a relative safety distance as in cars, allowing them to travel at much closer proximity and, thus, free up space on the rest of the infrastructure. This allows multiple trains to run in a synchronous way, dynamically adjusting their speed based on the preceding train to maintain the safety margin between the trains and form a convoy. Additional information such as the route allows them to optimally virtually couple or decouple based on their needs, while at the same time improving the capacity performances of the overall section.

Virtual coupling builds upon ERTMS level 3, known as the “moving” block, which is the evolution of the ERTMS level 1 and 2 signalling and speed control systems that are currently in use. From ERTMS level 3, virtual coupling maintains the GSM-R communication properties with the RBC (Radio Block Centres) for reporting the train position, obtained through fixed balises. It also receives the Movement Authority (MA), which specifies the safe distance a train can travel before reaching a danger point. Furthermore, the TIM (Train Integrity Monitoring) system is required to ensure no train cars detach from the convoy.  The EVC (European Vital Computer) is required for automatically computing and supervising the braking curve calculated based on the end of the MA.

In addition to these components, virtual coupling introduces a V2V (Vehicle to Vehicle) communication layer for synchronous movement of trains in the convoy. Automatic Train Operation (ATO) is also essential because of the very short driving reaction times required in Virtual Coupling.

The main innovation is down to the new structure of the Movement Authority (MA), which is not constrained by the end of the block section as with traditional signalling systems or at the end of the “moving” blocks as in ERTMS level 3. The new MA in virtual coupling is extended at a safety margin from the rear end of the train in front instead, and guides the train behind towards reaching the same speed of the leading trains. Furthermore, by combining V2V and RBC information, the MA also contains speeds, acceleration and route info of surrounding trains.

As mentioned, the main benefit of virtual coupling is the increased capacity that can be achieved on the lines, “virtually” coupling more trains together and managing the resulting convoy as if it were a single train. From a traffic management point of view, this not only allows an increased train throughput on open track, but also at junctions and stations, reducing the bottleneck effect of these sections.

The possibility of virtually coupling and decoupling also allows for more flexible train services. Imagine a convoy passing through a secondary station, having the possibility to perform “regional” services by detaching the last train before entering the secondary station, while the rest of the convoy continues at high speed towards the end “hub”. After having stopped at the station, this train could again couple virtually with another passing convoy and continue towards the next secondary station. In this way, two train services have been performed by occupying the space of only one. Transport capacity could therefore be managed in a much more flexible and on-demand way, making rail much more attractive.

Virtual coupling also brings benefits for the infrastructure. Thanks to the TIM and the centralised MA dispatching, current train detection systems such as track circuits and trackside signalling infrastructure could be dismissed. This would reduce the cost of maintenance and increase safety on the line.

Currently, the Train Integrity Monitoring (TIM) system is under study and has not yet been developed, and difficulties arise when it comes to monitoring train integrity for mixed train compositions, like freight trains or old passenger coaches. This system is supposed to substitute the trackside train detection systems, and has a key role in ensuring safety on railways. Until a suitable technology is adopted that could convince policy makers and the rail industry, there will be a big ideological barrier towards virtual coupling.

Furthermore, in case of communication problems and faulty systems, trains are brought to a complete stop. If they are not equipped with alternative train protection systems, they cannot move anymore. Secondly, train operations rely on very strict requirements, so when functions are not performed in the most precise way, hazardous situations may arise. The need for an almost fault-free system decreases the likelihood of adoption and combined with the still immature technology, prevents the industry from using it.

Lastly, in order to gain benefits at bottlenecks, junctions and stations will most likely have to be redesigned. With the current infrastructure, trains would need to be decoupled way in advance before entering a bottleneck, or would need to stop. Therefore, junctions will need to be faster in setting their switches in order to allow faster direction changes. And station platforms could be extended in order to accommodate more trains and therefore eliminate the need of decoupling convoys following the same route before stops.

Nevertheless, virtual coupling seems to be the future of more flexible and on-demand responsive train services. If the technology could be developed appropriately and if the industry will work in this direction, train service provisions could see a significant change from the current conception we have.

Currently, a version of virtual coupling has been developed for freight services in Russia along the new silk road, which was claimed to have improved capacity by halving headways between trains. Very few other cases can be found and almost all relate to experimental settings. On the research side, the European Union has financed several research projects for virtual coupling and other relevant technologies like TIM, ATO and fail-safe communications systems, involving rail industry actors, universities and research institutes. These research projects could deliver very promising results and may convince the rail industry this is the direction to go. This could prove tremendously beneficial for rail services by increasing the flexibility and the competitiveness of rail compared to other transport modes.