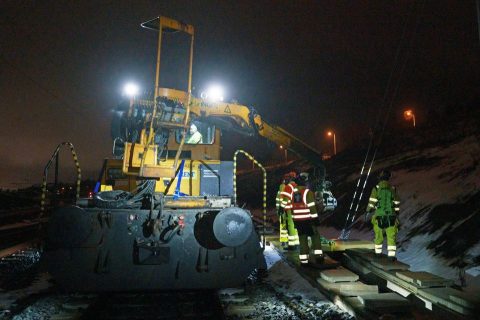 The reopening of the double-track Folloban railway between Olso and the city of Ski has been pushed to February 12, while the trial runs have been delayed until tomorrow, Saturday. It means that Bane NOR’s 3.5-billion-euro Folloban continues to cause headaches following its shock closure following a fire a mere days after the official opening.

All was good and well when King Harald V and crown prince Haakon Magnus performed the official opening of the Folloban on Monday, December 12, in Oslo. A week later, smoke was discovered coming out of a technical facility at Ski station. At the time, the disruption of services was forecast to last until January 9, a date that was subsequently pushed back several times.

The problem was subsequently assumed as being an electrical grounding issue, which caused electrical overheating. This then prompted a major overhaul of the system. Testing activity resumed on Monday, but Bane NOR teams soon discovered that the inspection and repairs of the cable terminations and joints was more time-consuming than anticipated, and delayed the first trial runs to Saturday, January 20. The testing programme is expected to run through January 31.

Later today, the Norwegian infrastructure manager is expected to turn the power back on later today. A dieseltrain will be used to make a preliminary test run on Friday as well, in order to check the signalling system. The resumption of regular services was delayed from February 1 to February 12, Bane NOR said on Thursday.