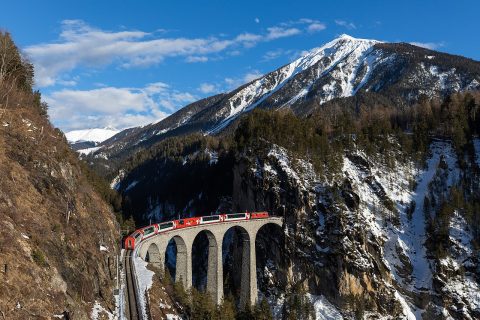 This Saturday, Swiss operator Rhaetian Railway (RhB) will attempt to run the longest passenger train ever assembled. In this second part of a two-part series on the record attempt, RailTech.com puts the spotlight on the unique route the train will take.

The train will depart from the Swiss village of Preda and head towards Alvaneu, close to 25 kilometres away. The route is part of the 63-kilometre Albulabahn, known around the world for its famous bridges and tunnels. The most famous is arguably the Landwasser viaduct. At 142 metres in length and 65 metres high, it is one of the highlights of the tour.

Before getting there, the train will pass the Greifenstain tunnel. At almost 700 metres, it is not the longest of the 22 tunnels along the Albulabahn. That would be the 6-kilometre-long Albulatunnel. With the train departing in Preda, located at the end of that tunnel, the Albulatunnel will be closed for a total of 12 hours on Saturday.

Once the 1.91-kilometre train sets off, it will in fact begin a slow climb towards Alavneu. Preda is situated at 789,4 metres above sea level, Alvaneu at almost 1,000 metres. The departure time is set at 14.00 and the train is expected to reach the Landwasser viaduct one hour later.

Technology partners in the record attempt on October 29 include Stadler, ABB and Siemens Mobility. Railway enthusiasts can tune in Blick TV for a live report.