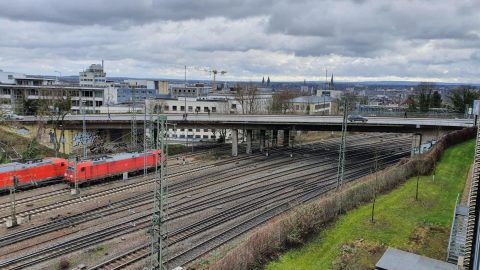 By December 2023, it should become possible for the first time to travel between the Dutch city Eindhoven and the German Aachen by train. The Dutch provincial government of Limburg has taken the lead in the initiative.

This is reported by local media, including Eindhovens Dagblad and 1Limburg. A spokesman for the province of Limburg told the latter news platform that it will be possible to run intercity trains between Eindhoven and Aachen at the “edges of the day”. That is, trains will run in the morning and evening. The spokesman also reveals that the international connection “has the potential to grow into a full intercity connection in the future”.

Arriva told 1Limburg it wants to operate the line, which a spokesperson says is a “long-cherished wish”.”As a operator of trains in the province, we are able and willing to make a concrete contribution for this as well,” the spokesperson is quoted.

Little space on the rails

The train connection between Eindhoven and Aachen has been discussed for a long time. In June 2021, the message from then-Secretary of State for Infrastructure and Water Management Stientje van Veldhoven about lack of space in Eindhoven seemed to draw a line under the timely realisation of the line. According to current State Secretary for Infrastructure Vivianne Heijnen, a direct rail link between Eindhoven and Aachen is difficult, because  “space on the rails is very limited at the moment”, she said. Heijnen did say that the Eindhoven-Aachen rail link is also “of tremendous importance” for the Dutch cabinet. “We have discussed with our German partners that it has to happen”, she said.

Last week, the endeavour got wind in its sails again when a motion by CDA MP Harry van der Molen on the rail link was passed with support from parties VVD, D66 and the BBB. From 2025, it is also planned new regional express train will run between Maastricht, Heerlen and Aachen. The gain in travel time with an intercity train between Eindhoven and Aachen is therefore limited when this train will also run, according to infrastructure manager ProRail. However, with the importance of the train connection it now seems it will already be possible to travel by train between the two cities two years earlier, whether the intercity will remain running simultaneously with the regional train it remains to be seen.

Last month, a new service between the Dutch town of Coevorden and the German border town of Bad Bentheim was also announced. Part of the link between the cities of Emmen and Rheine, the additional service is tentatively planned for mid-2025.

A version of this article appeared on Dutch sister publication SpoorPro.