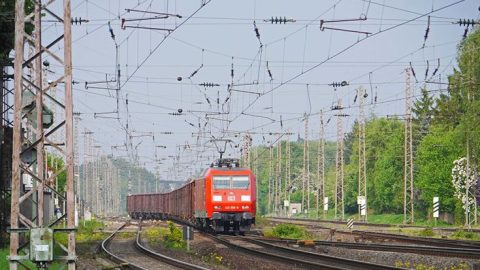 Published on 04-10-2022 at 11:50
Freight train on electrified railway in Germany Elrich Westendarp/pixelio.de

The electrification of the rail network in Germany is progressing slowly, while a clear target of 75 percent by 2030 is set. “Virtually nothing has happened in Germany since 2019. Just 61 percent of the rail network is electrified”, said Dirk Flege, managing director of the Pro-Rail Alliance. The rising costs of construction could play a role, as the cost-benefit analyses of electrification have a higher chance of falling in favour of not electrifiying.

The German federal government plans to electrify 75 percent of the route network in Germany by 2030. This was stated in the coalition agreement between the three parties (SPD, FDP and the Greens) who form the government since 2021. “This goal is becoming ever more distant,” said Dirk Flege of the Allianz Pro Schiene.

The federal railway network in Germany currently covers 33,400 kilometres. Most recently, a good 65 kilometres per year were newly fitted with overhead lines, according to the Pro-Rail Alliance. “In order to achieve the federal government’s goal, however, 500 kilometres per year would have to be electrified. In a Europe-wide comparison, the lack of dynamism in this country is shameful”, said Flege.

In fact, in the previous coalition agreement of February 2018, the CDU / CSU and SPD agreed to electrify 70 percent of the rail network in Germany by 2025, which is also not in view, a 9 percent increase in electrification in three years being unlikely with the current electrification rate.

Although currently just 61 percent of the railway net is electrified, 74 percent of all train kilometres are covered electrically. This is because the sections with the most traffic are electrified. Electric trains also carry significantly more passengers or goods per train than diesel trains. This explains why more than 90 percent of rail transport services in Germany are already provided electrically today.

Flege: “It is true that 93 percent of the current transport performance in rail freight transport is provided electrically. However, if truck transport is to be shifted to the rails on a large scale, then the previously non-electrified rail routes must also be fitted with overhead lines. Freight trains need overhead lines over long distances, they won’t get very far with alternative drives.”

As with all investment projects, it is legally prescribed that the cost-effectiveness must also be observed when electrifying routes. This means that only projects that bring at least as much macroeconomic benefit as they cost may be implemented. Therefore, many projects were checked for their so-called benefit-cost value.

In total, the federal states, associations and infrastructure manager DB Netz proposed 173 routes for investigation, of which just 34 were selected for freight electrification on the basis of a catalogue of criteria and subjected to a macroeconomic evaluation. As a result, it was found that – in addition to the rail requirement plan – eight additional electrifications for freight traffic would make sense.

According to the transport ministry, almost all electrifications for freight transport that are economically viable are already covered by the rail requirements plan. There are also still non-electrified routes that are used by freight trains once or several times a day, they admit. However, the study “Electric Freight Railway” showed that electrification with contact wire is currently ‘not worthwhile for the taxpayer’. As with (regional) passenger traffic, alternative drives should be used here in order to close the existing electrification gaps, it is stated.

A cost-benefit for large infrastructure projects is the standard, and not without good reasons. However, the currently skyrocketing costs of construction could make reaching the electrification goals even more of an uphill climb. With a 40 percent increase in construction costs , almost a dozen routes could slip below the threshold, said Lukas Iffländer from the passenger association Pro Bahn to the Tagesspiegel. The cost-benefit study of the current Federal Transport Infrastructure Plan is ‘hardly meaningful’.Some calculations for electrification of passenger routes would be based on incorrect assumptions, he says. “The number of passengers forecast for 2030 was already reached in 2019”, says Iffländer.

In fact, Iffländer advocates forgoing the cost-benefit analysis entirely when it comes to electrification. An overhead line should be approved as standard for a certain number of trains, otherwise, the federal government will miss its goal of electrifying 75 percent of the route network by 2030, says Pro Bahn.

Who should take action?

In Germany, the Federal Transport Infrastructure Plan (Bundesverkehrswegeplan) which runs until 2030 forms the basis for the federal government’s draft law to amend the expansion laws for federal railways, roads and waterways, for which plans are made in so-called requirement plans (bedarfsplane).

Especially for regional transport, instead of looking at the electrification as equipped on the infrastructure as a measure, the transport ministry proposed to use the parameter “electrical operating performance”, in other words the percentage of train kilometres travelled that are covered electrically. This also covers alternative drives, and taking a look at the coalition agreement, it is not detailed that the 75 percent refers necessarily to overhead line electrification.

Electrification, as when steam was outed…, no longer is timely – so it is.
After “Toyota Case”, now when not even core niche customers afford luxury of not caring about “eta” – a shift is needed!
In fact, all railway technicalities, not safely ensuring predictable stops, now are due for shifting out.
“Optimal maintenance”, now big business, is a symptom!…
(Nothing but a contemporary railway is the optimal! Broken rails shall not remain cause number one, for derailments, etc., etc.!)