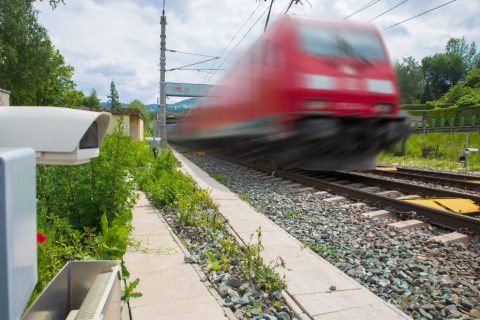 How is train monitoring in Austria and Europe developing?

Published on 29-09-2022 at 11:15
Monitoring checkpoint in Austria voestalpine Signaling

Austria is a frontrunner in Europe when it comes to monitoring of trains. ÖBB Infrastructure and voestalpine Signaling are currently installing checkpoints where multiple monitoring solutions are combined. How can this improve operations of railway operators that run on the Austrian tracks and the railway system as a whole?

“By combining different sensor systems into a modular platform, we created a new standard of system architecture for wayside sensor applications. Next to combining different sensor systems in one checkpoint, this enables us to connect the data from the sensors easily and create useful data-based applications to increase the efficiency of Railways”, says Liebminger. ÖBB Infrastructure is really the ‘reference’ of building these kinds of checkpoints to measure rolling stock in Europe, he adds. “But in the future we can do much more with the data we get from the sensors”.

The system is modular, explains Manfred Kaltenegger from voestalpine, who manages the project with ÖBB. This means that more types of monitoring sensors can be added to the checkpoints in the future. The project consists of installing 47 of these checkpoints across the Austrian railway network.

Each checkpoint initially consist of the following monitoring systems:

There are two reasons for the use of monitoring checkpoints at ÖBB Infrastructure AG. Systems are mainly installed for safety reasons, so that when alarm limits are reached the information is passed to the train driver via text message and to the train dispatcher via an application. For example, when there is a flat spot on a wheel which is too big to allow the wagon or train to keep running on the network, it can be decided to leave the concerned wagon at the next station.

The second use is for predictive and condition-based maintenance. An acoustic measurement system, which ÖBB Infrastructure also plans for a test installation, is not based on alarm limits where you need to act immediately. A defect on for example an axle bearing can be detected much earlier with acoustic sensing, before the damage is so severe the train needs to be taken out of service. “With every train that passes one of our checkpoints we have measurement data that is currently not yet used much afterwards. It is available, but is not yet used for special analysis”, according to ÖBB Infrastructure.

ÖBB Infrastructure AG also has plans to install wagon identification systems on the checkpoints, which registers a wagons RFID tag, a unique number identification. With the RFID systems, more quality of other data can also be achieved.

For every wagon that passed a checkpoint it was unclear which was the first axle and which the last. With the RFID tags, the measurements can be matched to the single wheel of every axle for a longer period. The installation is starting this year, and is already in use on similar systems in Austria.

ÖBB Infrastructure AG started with some services for railway companies that use their tracks. They provide them raw data from the hotbox and WILD system to do their own analyses, which is provided by the ÖBB INFRA:INFOHUB. There are for example railway undertaking customers who optimised the loading of wagons using the data, but there are more opportunities.

In the future it will be necessary to get more useful information out of this data so railway companies can act before there is a critical alarm, according to ÖBB Infrastructure AG. For this, it is working on a dashboard to provide analysed data, for example to detect a flat spot or damaged wheel over a longer time. Data from the Hot Box Detection is for example already used to check braking systems and to see what the benefits of different braking systems are. The last years were more about getting data to the railway undertakings, now the focus is more on additional analysis.

As the management of railway infrastructure is a national task, the focus of countries in terms of monitoring data mostly remains within borders currently. Over the next few years there will be more discussions about combining data from different countries so you can follow a train across borders, ÖBB and voestalpine predict.

The Austrian infrastructure managers are working on cooperating with neighbouring infrastructure companies on monitoring data. For example, analysis of tendencies with data from multiple countries would be useful for ÖBB Infrastructure AG. “Across Europe there are currently different alarm limits, and different reactions to alarms. The future will be to get more in contact and find solutions across borders, but this needs a few years and will not be an easy task.”

Helmut Liebminger also sees many differences in railway monitoring across Europe. “In for example Nordic countries, train monitoring sensor data is already made available to railway operators, but some countries are lagging behind. It will be an important step to allow other participants in the railway area to access this data to optimise operations.”

“We launched a set of visual based sensor applications at Innotrans. The next steps are to get new customers for our brand new acoustic system and further develop the AI capabilities to create value for our customers”, says Liebminger. Concerning acoustics there is still some way to go, he says, especially in Europe. “Acoustics give you an insight into the status of your bearings in a very early state in a predictive sense. Especially in countries where there is no legal separation between infrastructure and rolling stock such as the USA and Australia, acoustics have become a standard because the focus is more on the efficiency of the Railway system as a whole”, he says.

However, also in Europe acoustic sensing gains more importance, which will help to enable the shift to predictive maintenance. This not only benefits wagon owners and railway undertakings, but also infrastructure managers. Preventing damages in rolling stock results in less damages to infrastructure and less incidents as well, which could otherwise cause congestion of the railway.

Wayside Train Monitoring Systems (WTMS) and asset management take centre stage at the Intelligent Rail Summit, which will take place on 16-17 November in Konstanz, Germany. Click here for more information about the event, and here to access the programme.