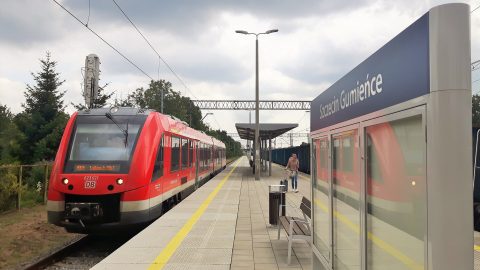 Poland to upgrade railway line Szczecin to the German border

To achieve a shorter travel time for passengers and a more efficient transportation of goods between Szczecin Główny and Germany, Polish railway manager PKP PKL will modernise the railway line to the Polish-German border. Works on the line including a second track as well as electrification and should be finished by the end of 2025. Contractor Databout was selected for the design works.

The railway line from Szczecin Główny in Western Pomerania to the Polish-German border eventually leads to Berlin. Comprehensive modernisation of the entire section on the Polish side is planned, with the addition of a second track on the previously single-track sections. In accordance with an agreement between PKP PLK and its German counterpart DB Netz, the two infrastructure managers will cooperate in the coordination, preparation and implementation of projects for the development of the Berlin-Szczecin railway connection, and the section Szczecin Gumieńce to the German border will be electrified.

Thanks to the new track, catenary network and signalling equipment, trains will travel safer and faster on the section, passenger trains with a maximum speed of 160 kilometres per hour, and freight trains at 120 kilometres per hour. to increase the safety of the railway as well as the nearby road and pedestrian traffic, the existing rail-road crossings will be replaced with collision-free intersections. In place of the Cukrowa Street crossing, the construction of a railway viaduct, a crossing under the tracks and the reconstruction of parallel roads are planned.

Three new stops for passenger will be realised, in Szczecin Pomorzany Południowy, Warzymice, Przecław, and a new station in Kołbaskowo. The Szczecin Gumieńce station will be adapted to accommodate freight trains with a length of 750 metres, and an extra platform for passenger trains will be built. The new platforms will be higher, which will make it easier for passengers to get on and off the trains, and people with reduced mobility will benefit from ramps and guidance paths.

The selected contractor for the design work is the Polish Databout, financed from PKP PKL’s budget for around 1.9 million euros (PLN 9 million). Completion of the design works and the start of construction works is planned for mid-2024. The works on the railway line is planned to be completed by the end of 2025. The completion of the entire project of the German-Polish connection is scheduled for the fourth quarter of 2027.

A pity, however, just “safer”, etc., but still not safe…
(Broken rails, the most frequent reason of costly – and fatal – derailments, now should be outed – at least, at new or reinvestments, etc.!)
Large scale, now constructed railways, are cementing, thus providing for maintained and – even worse – for future bottlenecks, disturbing, noise, etc…
Other devices, by air and by sea, etc. upgrade – and, for sake of Industry, etc., sustainably, now has to be met with!
A New Old Railway is needed!