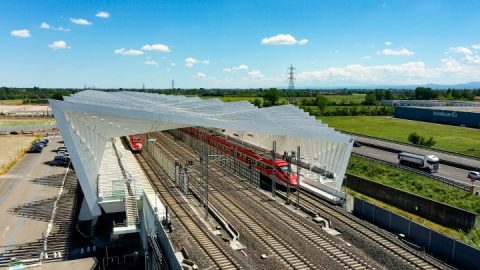 Rete Ferroviaria Italiana (RFI) completed the tender process for the rollout of ERTMS across Italy last month. The 2.7-billion-euro package is split across four regions and four lead companies, and covers a total of 4,220 kilometres of tracks.

Hitachi Rail will head the first group of companies tasked with rolling out ERTMS across some 1,885 kilometres of rail in northern and central regions of Italy. At 1,3 billion euros, it is also the largest package of the tender launched last December.

In March, Alstom was tapped for the design and implementation ERTMS in the Italian regions of Sicily, Lazio, Abruzzo and Umbria, the so-called Central South region in RFI’s book. It covers around 1,400 of tracks and carries a value of 900 million euros.

MERMEC STE of France will be responsible for the implementation of ERTMS on some 530 kilometres of track in Italy’s central region. It will do so alongside the Italian Salcef Group for 323 million euros. Finally, the 405-kilometre southern package, valued at 251 million euros, will come under the responsibility of local player ECM.

The tenders should see the implementation of ERTMS on more than 3,400 kilometres of track by 2026. The technology should be implemented across the entirety of the Italian network a decade later.

Want to learn more about the rollout of ERTMS in Europe? Join us at RailTech Europe on 21-23 June for updates. Click here for more information and registration.