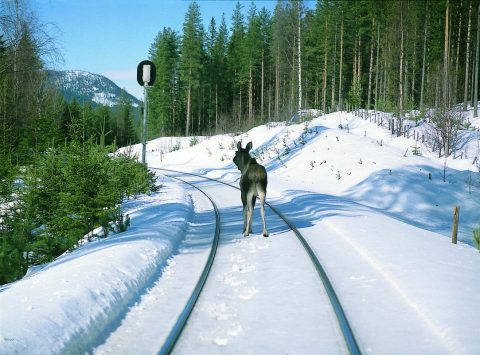 In an effort to reduce wildlife train collisions, Bane NOR will be trialing new measures to help scare moose off the tracks in Norway. Between 15 and 20 locomotives will be fitted with audio equipment.

As part of the Wildlife Warning Project, researchers of the Ruralis department of Rural and Regional Research have discovered that the most effective way of dispersing a moose population is the sound of human voices. It proved even more effective than barking dogs or the sound of howling wolves.

Bane NOR and Ruralis intend to discover whether sending an audio signal from locomotives will send the animals running. Cameras will also be fitted to the trains, so that researchers can study the animals’ behaviour and response to different signals. The Norwegian infrastructure manager expects these measures to be cheaper than installing fences and clearing bushes and other vegetation along the tracks.

Moose populations tend to migrate along the train tracks in winter in order to find food. Due to the snow cover, trains are often run quieter than expected. Research has revealed that the horn of a train does not scare the animals away. That, coupled with the fact that trains need up to one kilometre to come to a full stop, results in close to 2,000 wildlife train collisions in Norway on an annual basis.