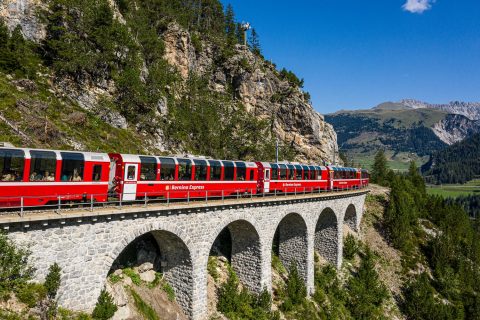 How data measuring is done on the Swiss small gauge tracks

Next to the regular Swiss railway network, there is a network of one meter gauge of around 1500 kilometres scattered across the country. Historically, not one of the 30 railway companies that operate on these tracks has a measuring train or car, so how can they make use of measuring data? Matthias Manhart, head of Rhomberg Sersa, explains their solution at the Intelligent Rail Summit 2021 in Bilbao.

The trains on the small gauge tracks in Switzerland are for a part touristic trains, such as panorama trains, but also regional trains and S-Bahn-like suburban trains. A lot of meter gauge tracks are not connected to each other, and have lengths of for example 50 or 100 kilometres.

This makes it largely different from the standard gauge network of Swiss Railways SBB of 1435 mm. Around 30 different railway companies operate on the small gauge, none of which have their own measuring trains to gather data. “At the same time, the government asks for more data about the status of the infrastructure”, says Matthias Mannhart of railway engineering service provider Rhomberg Sersa which co-developed a solution.

In this, the government doesn’t make a difference between the big Swiss railways on normal gauge and the small private railways on meter gauge. “They expect the same data and same quality before funding for example a track renewal, because they want to know why it is necessary and have proof that the renewal is needed.”

Together with iNovitas, Rhomberg Sersa established a service with the key idea that the small railways have easy access to the data via a dashboard. Asset data from railways is combined with measuring data from a wagon that can be attached to trains from all the different operators. “We also needed one approach, a universal algorithm for this meter gauge network. This is quite common for us in Switzerland, so everyone can benefit from the knowledge of others.”

Measuring systems on the wagon

The company developed a measuring wagon with various coupling systems so it can be used by all the railway companies and coupled to different locomotives. It measures track geometry, rail wear and overhead line position. It is also equipped with a camera to capture images and video and has a laser scanner.

For the database, the system IRISSYS from the German company Erdmann. Together with the Technical University of Graz, the company established a quality index for the small gauge railways. “This was not so simple, because we learned quickly that we could not adapt normal gauge standards directly to meter gauge. The behaviour of the vehicle was not the same.”

A digital twin of the tracks was also developed, using the images captured by the measuring wagon based on technology from Swiss company iNovitas. “You can go into a picture and measure distance on the millimeter on the picture, based on 3D coordinates.” It is useful for example by getting information about trees and bushes around the track.

“What we learned is that the companies don’t have full time specialists for the diagnosis of the data. That’s why we established a dashboard where we bring together measuring data and asset information in a very simple way.” In the future, the company plans to add more measuring types on the wagon, such as ground radar and ultrasonic sensors. The goal is to have one system for all meter gauges in Switzerland with a common data architecture.