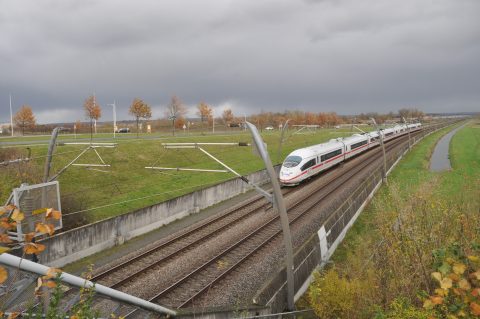 Amsterdam-Berlin connection could be less than 5 hours

Dutch and German officials called to add the Zwolle-Enschede-Münster connection to the priority TEN-T network during a meeting with members of parliament in The Hague. By measures such as doubling a section of track in the Netherlands, the train journey between the west and east of the Netherlands can be shortened by at least half an hour. This benefits the international connection to Berlin, which could be less than 5 hours in total.

The connection between the two major capitals of Amsterdam and Berlin, the current journey time of more than 6 hours has been seen as a shortcoming for a long time. At the same time, the Dutch eastern province of Overijssel has long been advocating a better connection between the region and the economical cluster of cities in the west of the country known as the Randstad, including Amsterdam.

To achieve the better connection and get the needed priority, the Dutch and German parties ask for the government’s support in including the Zwolle-Enschede-Münster connection in the Trans-European Transport Networks (TEN-T). This is an important condition for European funding.

A quick scan led by engineering consultancy firm Royal HaskoningDHV shows that a lot of travel time can be gained by making adjustments to the railway between Dutch city of Zwolle and the Twente region near the German border. The railway investments would be approximately 3.5 billion. This includes doubling and speeding up the currently largely single-track railway connection, tackling the rail bottleneck at Wierden and modifying stations. The Dutch and German officials presenting the plan consider this ‘a reasonable investment’.

Including the measures already taken on this connection and Germany’s plans of the ‘Deutschlandtakt’, the train journey between Amsterdam and Berlin in total could be shortened by one and a half hours to less than five hours.

For another 100 million euro, train services to Münster and Dortmund can be made more sustainable, within the project EuregioRail. Between Münster and Enschede, many commuters, students and tourists travel by train every day, of whom about two thirds change in Enschede from or to Dutch trains. With the investment, a transfer in Enschede will no longer be necessary. In time, improved track could become part of an extra fast train service from Amsterdam to Berlin. The journey would then be one and a half hours shorter.

The German and Dutch administrators consider improving the railways in Overijssel ‘a matter of national importance’. A Dutch member of the Executive Council of the province of Overijssel calls it incomprehensible that there is still no better rail connection between “two top economic regions, the Zwolle and Twente”.

Trains from Berlin to Amsterdam go through Amersfoort, Deventer and Osnabrück. I can’t understand why rerouting them through Zwolle or even a detour to Münster would help them. The botteneck between Minden and Wunsdorf (Hannover) is more important.

The double tracking and electrification of the routes may be meaningful for the regions connected. The inclusion in TEN-T seems to be a pretext to divert European money. Are more funds accessible at the EU level that at lower levels of goverment?