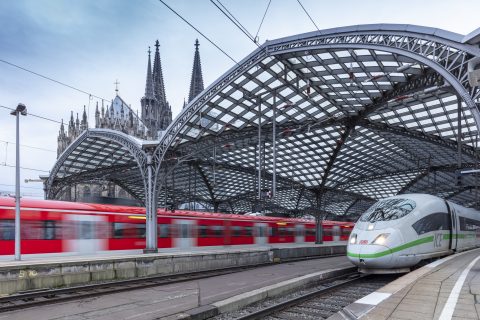 Deutschlandtakt: when Germany wants to synchronise all its trains

Germany has a major project for the full clockface timetable of all passenger trains. The aim would be to synchronise both long-distance and regional traffic, which is not always the case today.

A train every half hour from city to city and from village to village. Convenient transfers without long waiting times, even in the countryside. Riding a train anywhere in the country would be as easy as riding the S-Bahn in the cities today. This is the Deutschlandtakt, the german’s clockface timetable (also called D-Takt). This vision for a new railway age is to become reality in Germany by 2030 – with additional, reliable and fast connections for people and goods by rail. But what does this imply?

Talking about the german’s clockface timetable might seem surprising, as hourly long-distance intercity trains have been one of Germany’s great railways success since 1979. At regional level, many lines were also gradually converted to clockface timetable. The regionalisation of this segment from 1996 onwards has further accentuated this clockface timetable in the area of the Länder (regional states). But the problem is that each German state has made its own timetable without taking into account the long-distance Intercity, which follows its own national logic. As a result, there are sometimes long connection times between an Intercity operated by DB-Fernverkehr and the regional trains now operated by the Länder.

All trains arrive at the same time

The basic idea of D-Takt would be to have long-distance trains arrive on the hour or on the hour 30 in each city. Regional trains would arrive in each city between 10 and 5 minutes before the arrival and departure of long-distance trains, thus ensuring perfect connections. Once the Intercity trains have left the station, the regional trains would also leave a few minutes later, heading for the rural/regional destinations. In this way, all trains are synchronised every hour or 30 minutes, and this can be repeated throughout the day.

But how do you synchronise trains when travel times are not identical between German cities? Indeed, as no trains arrive just on the hour or on the hour 30, it is planned to remedy this by speeding up the trains where possible. A journey that currently takes 65 minutes should be reduced to 60 minutes, as shown in the theoretical example below.

However, achieving such a result would require a great deal of work, for example, to rectify curves to increase speed. The D-Takt study consists to calculate the best synchronisation as possible. The last version of this plan was providing in June 2020 although the final decision and infrastructure works are bound still to change in the 20+ years.

D-Takt is already being implemented. The first step was to introduce half-hourly long-distance services between Hamburg and Berlin for the timetable change in December 2020. Further projects will be implemented gradually in the following years.

However, the project is still the subject of much debate, both in terms of the amount of engineering works and investment required and in terms of criticism of the system, as some accuse D-Takt of being “a plan designed solely for Deutsche Bahn”. It is therefore permissible to ask what role private operators like Flixtrain could play. The fear is that D-Takt would monopolise train paths that would no longer be available to alternative operators. The rail freight sector is also concerned about the priority that will be given to trains in the future to ensure synchronisation.

These questions have not yet been satisfactorily answered at this time.

1 comment op “Deutschlandtakt: when Germany wants to synchronise all its trains”

Long stop times of regional trains at city main stations are inefficient, in particuar at cites with several stations being served (for passengers heading to a station beyond the main station).
30 minute long distance trains may not with hourly trains at the two sides.

The whole concept is based too much on the perspective of passengers from large cities, which take long-distance trains to other cities and then want to switch to regional/local trains. I suggest a 10 min-Takt on main lines.