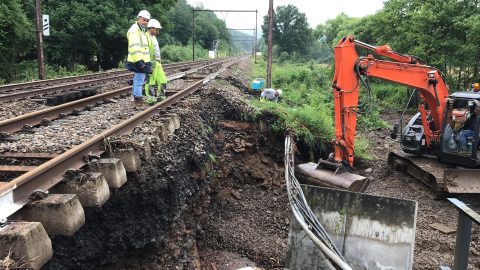 Flood recovery of railways in full force across Europe

The flooding in western Europe leaves behind major damage on railways. Large clean-up and restoration efforts are in progress, in this article an overview. Several lines in Germany, Belgium, the Netherlands, Austria and towards the Czech Republic were still disrupted on Monday and in some cases, no traffic was possible.

Water instead of trains on the rails, it was a strange sight. Now that most of it has gone down, layers of mud cover the tracks, which on some parts have been washed away. Track systems, communication lines and other infrastructure elements have suffered major damage from the water and mud.

Excessive rainfall last week turned small streams into powerful rivers, and the death toll in western Germany and Belgium rose to at least 170 over the weekend.

In Belgium, the rail infrastructure has taken a huge hit. “The severe storm that hit a large part of our country has had disastrous consequences”, said Sophie Dutordoir, CEO of operator NMBS in a joint press release with Infrabel. Trains were cancelled on several lines since the morning of Thursday 15 July. Liège-Guillemins station was able to reopen in the afternoon of Friday 16 July. The only high-speed line, which was affected by the storm, between Liège and the German border was put back into service on Friday afternoon.

Infrabel and NMBS made a plan for the resumption of regular traffic. A gradual, line-by-line return to service will take place between 19 July and 30 August. The Liège-Verviers and Pepinster-Spa lines, which were particularly affected by the floods, are expected to take the longest. Infrabel estimates the damage to be between 30 and 50 million euros, said Infrabel spokesman Thomas Baeken to VRT. “But the water has not yet disappeared everywhere. So we have to wait and see before we can make a good estimate.”

The important North Sea Mediterranean freight corridor also continues to be severely affected by the storm, said Infrabel on Friday afternoon. There was still no train traffic on both the main axis and the alternative detour route on Friday.

The Belgian network was inspected over the last two days and nights, sometimes with the help of drones in areas that were difficult to reach. According to infrastructure manager Infrabel, the damage is ‘enormous’. Many railway lines have been blocked, a bridge has collapsed, mudslides have displaced the ballast and many track sections and locations are no longer accessible due to ground subsidence under the railway infrastructure. Several electrical installations and works of art were damaged.

Hundreds of railway workers are working around the clock to deal with flood damage as quickly as possible. Some of Infrabel’s staff returned from vacation to help their colleagues in the flooded areas. The infrastructure manager also calls on contractors.

In Germany, the states of North Rhine-Westphalia and Rhineland-Palatinate suffered major flooding. On the Rhein-Ahr-Bahn, in the most affected region, seven bridges and 27 kilometres of track systems and many bridges were destroyed by the flood, says the Passauer Neue Presse. “If 20 of the 35 bridges on the Ahr have been destroyed, then you can already imagine the huge task that lies ahead of us,” said Federal Minister of Transport Andreas Scheuer in the newspaper. “We have been working from the start of the disaster to have a damage pattern on roads, rails, waterways and mobile communications”.

The total damage is still being assessed. For this Monday, the ministers has scheduled several briefings of his ministry on this. As far as the rail connections are concerned, the first prognoses for the clearance of branch lines are “only possible after extensive damage assessment, which due to the complicated situation on site is progressing only slowly”, said Scheuer.

Long-distance trains of Deutsche Bahn between Bad Schandau in Germany and Dečin, Czech Republic, are being disrupted. Since the affected section of the route can only be used on a single track, the trains are delayed by around 60 minutes. There can also be short-term train and stop cancellations. According to DB, this will probably be the case until Tuesday July 20.

According to Czech Railways České Dráhy, operation for the section Bad Schandau – Sebnitz might only be restarted on July 31.

After Belgium, the Netherlands and Germany, flooding moved to southern and eastern parts of Germany and into neighboring Austria on Sunday, as heavy rainfall fell in the Alpine regions. Due to flood situations in Salzburg and Tyrol, rail sections Golling to Werfen and Schwarzach-St. Veit to Saalfelden are cancelled on Monday. Austrian operator ÖBB expects this to last until Monday at 11:59 p.m. A replacement rail service with buses was set up on both sections.

Due to storm damage, no journeys are possible on Monday between Furth Palt and Statzendorf. According to ÖBB, this will probably be until 6:00 pm, saying the clean-up is in full swing.

After the water had subsided, the damage to the track at Eijsden, Limburg, could be inspected last weekend. said According to a spokesperson, the damage is ‘not as bad compared to the situation in Belgium and Germany’. Twelve reactance bonds have to be replaced, an electrotechnical component with which the two rails can be connected for the traction return current. Because the damage on the Belgian side is worse however, it will take longer before cross-border traffic is possible again.