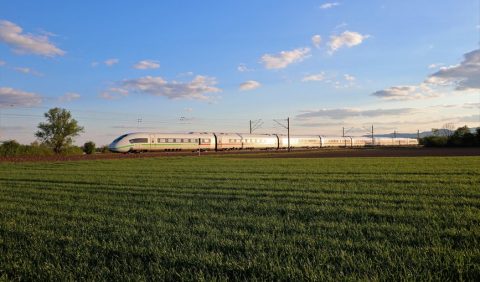 Deutsche Bahn will reduce its climate impact faster than initially planned. CEO Richard Lutz announced on Wednesday that the previous target of being climate neutral is moved forward by ten years – from 2050 to 2040. In 2025, the company will use 100 per cent green electricity for factories, office buildings and train stations.

Deutsche Bahn (DB) boss Richard Lutz informed the supervisory board at its regular meeting about the new target. It includes all areas of the railways in Germany, as well as the global logistics subsidiary DB Schenker. The German federal government recently set the current goal for climate neutrality in Germany for 2045, while Europe’s Green Deal has set the bar for neutrality in 2050.

To reach the target, Deutsche Bahn aims to emit less CO2 in the coming years with significantly younger train fleets in long-distance, regional and freight traffic and investments in operations. Another means is promoting alternative drives and fuels. 60 per cent of the German network is electrified, and to decarbonise the non-electrified lines, hydrogen is a favoured candidate, as Germany aims to become a leader in hydrogen production and use in transport. Technology pilot projects, together with partners from industry, also focus on greener local transport by road and rail. For example, the ICE ‘TrainLab’ serves as a driving test center for alternative fuels and digitalisation tech.

Plans include building new infrastructures for battery-powered trains, supplying fuel cell trains with hydrogen and using synthetic fuels on road and rail. The digitalisation of the railways and technical upgrades, for example in maintenance, should also have a positive effect on the DB Group’s carbon footprint in the coming years. Furthermore, DB Regio’s bus fleet will be converted to more climate-friendly fuels.

“In a comparison to the modes of transport in Germany, the railroad is the only one with a consistently positive climate balance since 1990″, said DB CEO Richard Lutz. “In the past 30 years, the railways alone have been able to significantly reduce their CO2 emissions by around 70 per cent. Travelling by train is active climate protection. And that is why the investment and modernisation offensive of our Strong Rail strategy is exactly the right way to organise modal shift and to achieve the climate targets.”

For a balanced CO2 account by 2040, DB will fully supply its plants, office buildings and train stations in Germany with green electricity from 2025. In addition, the heat supply will be “greened” and fossil fuels such as heating oil and natural gas will be gradually replaced. A higher energy efficiency should also ensure lower consumption in the coming years.