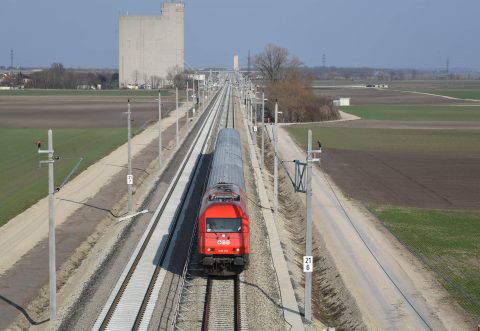 Austrian railway infrastructure manager ÖBB will further improve the track between Vienna and Slovakia’s capital Bratislava. The entire stretch will be electrified and expanded to double track. This will shorten the travel time between the two European capitals by more than 15 minutes. From December 2025, the first trains are to run on the continuous double-track line on Austrian territory.

Construction machines along the route are currently working on the modernisation of the stations and stops, as well as on the electrification. Also, works are already underway for the double-track expansion between Siebenbrunn-Leopoldsdorf and Schönfeld-Lassee. Now, ÖBB has announced to expand the double track for the entire section, which will start in parallel.

“It is already a project that many people benefit from”, says Franz Bauer, CEO of ÖBB-Infrastruktur. “Modernised train stations and stops will be available along the route, and all level crossings will be replaced by underpasses or overpasses. With the start of planning for the full expansion, we are going one step further and are raising the line capacity to a new level”.

Not only the two capitals are moving closer together. “All modernisation of the train station enables barrier-free access to public transport and goes hand in hand with an improvement in the Park&Ride offer. Commuters from the region in particular benefit from the expansion”, says Lower Austria’s Mobility Councilor Ludwig Schleritzko.

ÖBB has approached the expansion to double track step by step. In the first module, the Vienna section was expanded from September 2016 to December 2018. Since then, the line is double-tracked and electrified from Vienna Stadlau to the newly built station Vienna Aspern Nord. Passengers have benefited from a half-hourly service on the S 80 between Vienna Central Station and Vienna Aspern Nord since then.

Work in the Lower Austrian section has been ongoing since August 2018. In this second module, the double-track expansion between Siebenbrunn-Leopoldsdorf and Schönfeld-Lassee is planned. In addition, all level crossings will be removed and replaced by underpasses or overpasses. All of these structures are already designed in terms of their dimensions for full double-track expansion. For the third module, expanding the double track in the previously single-track sections, planning started this April. In December 2025, the double track on Austrian grounds should be finished.

The stretch between the Vienna city limits and the state border near Marchegg is already a major construction site. At the end of March, the so-called rapid conversion train worked its way from Schönfeld-Lassee station towards Siebenbrunn-Leopoldsdorf station and laid the second track over a length of more than five kilometers in just a few days. Regular rail operations were maintained. Raasdorf train station has been modernised in April 2020, Untersiebenbrunn train station was finished in December 2020. Glinzendorf, Siebenbrunn-Leopoldsdorf and Breitensee will follow in autumn 2021. The completion of Schönfeld-Lassee is planned for September 2022.