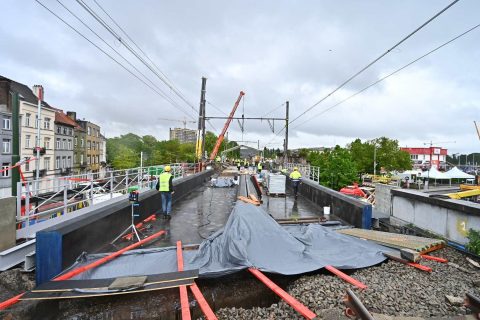 Belgium’s rail infrastructure manager Infrabel is renewing the western ring track around Brussels in twelve days. Railheads along a 20 kilometre route will be replaced as well as two of the Belgian capital’s railway bridges. The cost of this blitz operation, which is carried out until May 24, is four million euros.

The works on the western ring track around Brussels started last Wednesday and are scheduled to be completed on May 24. In twelve days, rail specialists, on behalf of Infrabel, work day and night on the modernisation of the infrastructure between the stations of Thurn and Taxis and Brussels-South. In total, no less than twenty kilometers of rails will be renewed.

The new rails are made of a sturdy type of steel, which greatly reduces the risk of rail fractures. They are supposed to last for thirty years. In addition, special rail pads are placed between the sleepers and rails that have a sound-absorbing effect. In addition, approximately one kilometre of sleepers and track ballast will also be renewed.

In Anderlecht, Infrabel is renewing the two railway bridges of Emile Carpentierstraat and Bergensesteenweg. “These bridges date from 1928 and must therefore be replaced”, says Infrabel. The four metal bridge decks are being replaced by concrete ones, which are easier to maintain. The new concrete bridge decks are more than twenty meters long and weigh 140 tons each. Their lifespan is estimated at a hundred years.

Belgium’s Federal Minister of Mobility Georges Gilkinet emphasises the importance of the rail renovation on this route: “After years of underinvestment in the railways, we now urgently need to catch up. The renovation works support employment in our capital, improve mobility in Brussels and reduce noise nuisance for local residents”. 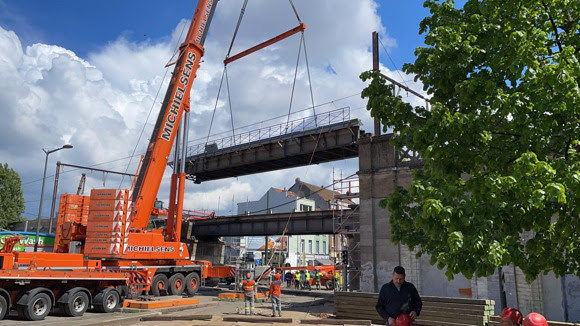 The western ring track around Brussels connects Schaerbeek in the northeast with Brussels South. It is a strategically important line for rail traffic in and around the capital, for both passengers and freight trains. The ring track is part of the Brussels suburban network Gewestelijke ExpresNet (GEN) and is an important alternative to the busy North-South connection.

The work is an extension of the recently commissioned Tunnel T in Schaerbeek. This renewed infrastructure makes it possible to connect the western ring track with the platforms of Schaerbeek station. The ring track is also an important line for Brussels companies that want to transport their goods by rail. “Think of car manufacturer Audi, for example, who transport their cars via this line”, says Infrabel.

The track works cost four million euros. The project is largely financed with resources from the ‘Boost Plan’. This is an initiative of the Federal Minister of Mobility, Gilkinet, which was launched six months ago and is aimed at creating a modal shift.