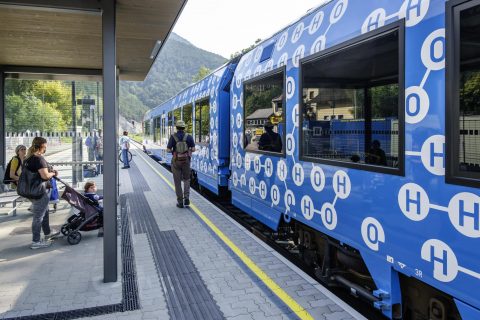 ‘Get past hydrogen filling stations for trains only’

One of the challenges for the further development and adoption of hydrogen trains are the creation of a hydrogen ecosystem and multi-modal fueling stations. That says Muslum Yakisan, President of Alstom for Germany, Austria and Switzerland. In a webinar streamed from the Coradia iLint in Salzgitter Germany, Alstom elaborated on their hydrogen strategy this Wednesday.

It’s no secret that French train manufacturer Alstom is all about hydrogen. Since the introduction of the first hydrogen train in 2016, the company is continuing to advance in the hydrogen field. As Alstom CEO Henri Poupart-Lafarge puts it, ‘for lines that are not electrified, there needs to be a solution to decarbonise. Hydrogen can play a key role in this’.

The building and developing of hydrogen trains is, however, not the only aspect in getting more hydrogen and less diesel propulsion in the railways. “We recognise that filling stations for hydrogen are very selectively financed and supported, when they remain for the single purpose of rail only”, says Muslum Yakisan, President Alstom DACH, covering Germany, Austria and Switzerland.

“It is time to get over this roadblock so filling stations can also be used for other means of transport, such as heavy trucks, garbage trucks or for the last mile in cities. There is immense potential and this can give more momentum to expand the use of hydrogen to different means of transportation.”

The creation of a hydrogen ecosystem is to be coordinated by local authorities, says the company. Alstom is also partnering with hydrogen suppliers and filling station providers, says Alstom CEO Poupart. The train manufacturer will not go into the filling station business, but does see the importance of working together for a hydrogen ecosystem. “There is growing appetite for multi-modal stations, which can also fuel buses or trucks. It is a challenge with we are helping this ecosystem to emerge”, says Poupart.

Germany has the ambition to become leading in hydrogen production and use in transport. 60 percent of the German network is electrified, and to decarbonise the non-electrified lines, hydrogen is a favoured candidate. In June 2020, Germany presented its national hydrogen strategy to produce green hydrogen at an industrial level. However, this does not go into the details of how this hydrogen will be distributed and how refueling of different transport modes could be combined.

In October last year, the construction of the country’s second hydrogen train filling station began in Hesse. Both stations currently in construction should be finished next year. It is the question whether for the future transport network as a whole, it is sensible to build stations for trains only.