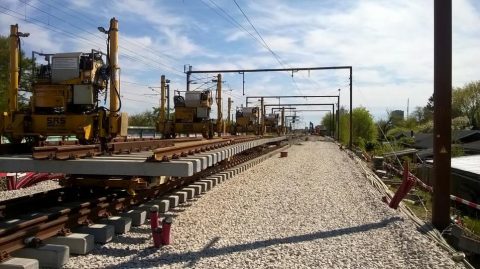 The track works on the Danish line consists of replacing and renewing worn rails, switches and sleepers on the section. In addition, the substructure is improved and the drainage system is renovated. The track renewal will lift any speed reductions caused by worn tracks. In total, the Copenhagen-Høje Taastrup section is approximately 20 kilometers long. Around 4.5 kilometres of rails and sleepers are to be replaced, including 32 switches.

The renewal of the tracks will should achieve far fewer errors in both tracks and switches. In addition to the increased comfort and improved operation, the renewal is also a prerequisite for utilising the full capacity that the upcoming new signalling system ERTMS on the line provides.

“The section between Copenhagen and Høje Taastrup is a cornerstone of the Capital Region’s infrastructure”, says project director Klaus Studstrup Jørgensen. “Therefore, this renewal of the tracks is also a necessary effort, as we help to ensure that commuters and other train passengers can look forward to more efficient and stable operation. The project is also crucial when it comes to securing the infrastructure for the future and contributing to trains on time.”

The project takes place at the same time as a historic renewal and expansion of the railway on Zealand, Denmark’s largest island. In addition to the establishment of the high-speed line between Copenhagen and Ringsted, which was inaugurated in 2019, Banedanmark is currently in full swing to roll out the ERTMS signalling system and electrify several lines, as well as building the Ringsted-Femern line.

The project will be divided into two phases, which run over two years. Work on the first phase between Copenhagen and Glostrup will begin on 17 April 2021 and is expected to be completed on 7 November 2021. The second and final phase between Glostrup and Høje Taastrup will be completed in 2022. During the first phase, partial barricade of the track will occur on an ongoing basis, while on the weekend of 23-25 July 2021, it will be out of service entirely for long-distance and S-trains.