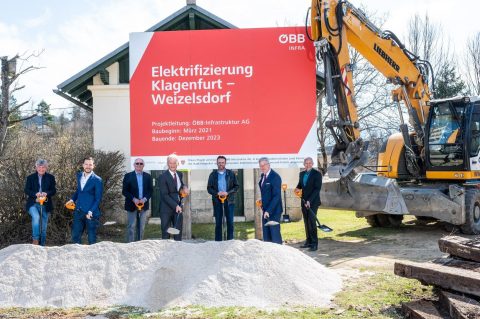 ÖBB to electrify the Rosentalbahn

The 12 kilometre long section between Klagenfurt and Weizelsdorf in Austria will be modernised by 2023. The project was launched last Sunday. In addition to the electrification of the route, also named ‘Rosentalbahn’, stops and level crossings are also being adapted or newly built. The investment costs are around 50 million euros.

Faster and more environmentally friendly from Klagenfurt to Weizelsdorf, that is the motto for the future of the railway line in the Rosental according to ÖBB. Sunday at a photo session, the official start of construction for the new future of the Klagenfurt – Weizelsdorf route was kicked off with Governor Peter Kaiser, Mobility Councilor Sebastian Schuschnig, Vice-Mayor Jürgen Pfeiler, Mayors Josef Liendl, Franz Ragger, Vice-Mayor Christian Gamsler and Board Director Franz Bauer from ÖBB-Infrastruktur AG.

In the future, trains between Klagenfurt and Weizelsdorf can run on green traction current instead of diesel , the approximately 12-kilometer section will be modernised in stages by 2023. In addition to the complete electrification of the line, this also means the expansion of the Maria Rain station, the adaptation of further stops as well as the closure or technical protection of several level crossings. In addition, a completely new stop is being built in Lambichl. The adaptation measures are supplemented by the additional creation of Park & ​​Ride and Bike & Ride parking spaces.

Governor Peter Kaiser: “More environmentally and climate-friendly and at the same time faster, more comfortable and barrier-free. The electrification of the Rosentalbahn not only shortens the travel time for commuters, but also strengthens the local economy and secures jobs. Investments in electrification also improve the good environmental balance of rail transport and generally increase the competitiveness of rail compared to other modes of transport.”

“The route between Klagenfurt and Weizelsdorf will be more than just upgraded by electrification”, said Board member of ÖBB Infrastruktur AG, Franz Bauer. “Everyone along this railway line will benefit from the measures to be implemented. On the one hand, it is the passengers who can look forward to shorter travel times on the S-Bahn trains and, on the other hand, safety is significantly increased by the technical safeguarding of the level crossings.”

Mobility Councilor Sebastian Schuschnig: “The electrification of the Rosentalbahn is the next important step towards the complete decarbonisation of local rail transport in Carinthia by the year 2023. This modernisation measure is entirely in the interests of future generations and climate protection. Especially now in times of crisis, the 50 million euros in infrastructure investments are more important than ever and the best economic stimulus package. In the future, not only will the many schoolchildren and commuters in the region benefit from the new, climate-friendly mobility offer, but also the entire economic and living location of Carinthia.”