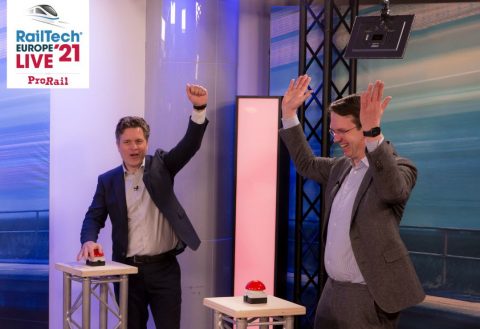 With more than 8.000 unique visitors of more than 90 different nationalities RailTech Europe 2021 has been a tremendous success. For three days, visitors of this digital event watched more than 100 speakers on three different stages.

The main topics that were discussed at RailTech Europe were the European Year of Rail, Digital Railway and Smart Infrastructure. Within these themes, important topics such as the Green Deal, international rail transport, ERTMS, ATO, Artificial Intelligence, BIM and preventive rail maintenance were discussed. Participants have the opportunity to connect with each other before, during and after the event.

“When the pandemic started in March last year I thought it would be a disaster for our company”, director of organising company Joan Blaas stated. “But a couple of months later we opened a studio in our office in Rotterdam and one year later a second bigger one. We decided to make RailTech Europe 2021 completely digital.”

“We quickly changed our strategy and plans and worked hard to gain a lot of experience with digital events and news broadcasting. We have made the digital edition of RailTech Europe a great success of which I am very proud. I want to thank everyone who was a part of it to make this all happen.”

Next year March ProMedia Group will organise a physical edition of RailTech Europe in Jaarbeurs Utrecht in the Netherlands. “In the 2022 edition we will talk further about about the next steps that will follow from the agreements that have been made for the European year of Rail 2021 between the member states and the European Commission, the plans for tripling high speed and doubling rail traffic by 2050, the European pilot projects that will be launched and many other interesting topics. I invite everyone to send in their ideas for interesting topics that can be discussed”, says Marieke van Gompel, programme manager of RailTech Europe.

Today and Friday it is still possible to use the RailTech Europe network platform to connect with other railway professionals, plan meetings and watch all the replays of the three stages. The replays will also shared with the participants by email. Make sure you still have access to all the content by registering for free with the following code: RailTechEurope2021.