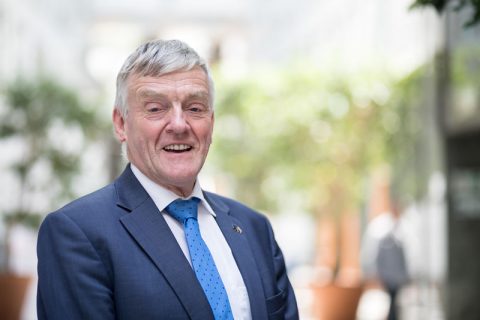 Former European Parliament member Wim van de Camp launched the Dutch campaign of the European Year of Rail on Monday at 1.30 pm. He did this together with director Corina de Jongh of network organisation Railforum, Justus Hartkamp of ProRail and Karin Haaksman of Unife via a live broadcast from the ProMedia Studios in Rotterdam, where the international digital event RailTech Europe 2021 will be kicked off one day later.

The kick-off on the Dutch side will take place prior to the official start in Lisbon, due to the European presidency of Portugal. The Dutch launch can be followed on 29 March from 1.30 pm via trade magazines RailTech and SpoorPro, after which the live stream will be transferred to Lisbon at 2.00 pm.

Wim van de Camp has recently been appointed as Dutch ambassador for the European Year of Rail, in which he will be the representative of the Dutch rail sector during the European activities. On Monday he will explain his ambitions as an ambassador and will give the starting signal for the Dutch campaign.

At European level, there is regular consultation with various member states about the programme of the European Year of Rail. In the Netherlands, knowledge network Railforum has prepared a programme for the European Year of Rail in several working groups. Director Corina de Jongh will talk about a number of these activities. One of the things in which the Netherlands will be expected to play a pioneering role is the realization of a multimodal European e-ticketing system.

Justus Hartkamp, ​​Deputy Director Corporate Strategy at ProRail, also joins the launch of the Dutch campaign. He will discuss how international cooperation can be further improved. Karin Haaksman has been representing the Dutch rail suppliers in Unife for several years. She explains why it is so important to stimulate innovation within the European rail sector and she will also go into a campaign to stimulate young talent to work in the rail sector.

Curious about how you can participate in the European Year of Rail and RailTech Europe? Then watch this video: