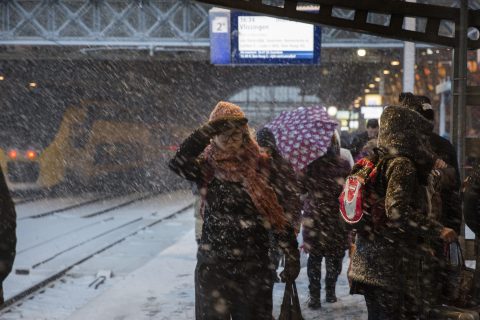 In the Netherlands, heavy snow and strong wind make it difficult for trains this week. On Sunday, trains on the main rail net were suspended for the entire day. This includes rail freight, which was down until Wednesday. “I’ve been working at ProRail for 15 years, but I’ve never experienced this before”, John Voppen, CEO of the Dutch infrastructure manager said on national television. On Monday, some trains slowly resumed operations, but there is no normal timetable until the second half of the week at the least. Northern Germany faces similar snow problems.

For the first time in ten years, a snowstorm hit the Netherlands as a cold front pushed through northern Europe. Because of this, the trains of operator on the main rail net Dutch Railways (NS) could not run for the entire day on Sunday. A layer of snow on the switches was the main problem for the disruption of operations. Although switches in the Netherlands contain a heating system, the layer of snow was too thick, commented infrastructure manager ProRail. The snow that melts turns into large and solid blocks of ice.

Around 400 workers had been active all night to remove the snow at several locations, but this was as emptying the ocean with a thimble, said ProRail director John Voppen on national television Sunday evening. “Snow was blown back into the switches within the shortest time.” Now that snowfall has stopped, repair works seem a little easier. Yet, the infrastructure will not be fully operational until at least Tuesday and maybe even Wednesday, said ProRail, which turned out to be the case.

The temperature is predicted to drop -15 degrees, during the nights this week. This could cause new problems, ProRail CEO Voppen acknowledges. But much depends on the combination with snow and wind. “When we get fog, it can freeze on the overhead line.” The rail manager will discuss this with the carriers. It could be prevented by running trains all night long.

“Since yesterday, we managed to move one train from the terminal to the emplacement in the port of Rotterdam”, said Jolanda Plomp, CEO of freight operator LTE Netherlands to sister magazine RailFreight. She said this on Monday morning, when passenger traffic had partially resumed, although gradually and surely not everywhere. “Nothing is moving. All we can do is wait.”

Plomp said that rail freight suffers losses ‘running into tonnes’ after two days of no movement. Whereas passenger traffic is already thinned out in light of the ongoing corona crisis, rail freight traffic must move on. “I hate to say this, but passenger traffic always gets the priority. ProRail is working hard to relieve the tracks, I am sure, but we have not seen any person removing snow from the Harbour Line in the port of Rotterdam, which is crucial for freight transport”, said Plomp.

This is why especially the rail freight sector is disappointed in the response of the infrastructure manager. “Luckily, roads and rivers were open for traffic, but these are competing modalities”, said Hans-Willem Vroon from lobby organisation RailGood. “It would be good if anno 2021, rail freight could continue in winter, heat and storm. This is not a normal response to winter conditions, this is quite unique!”

ProRail said on Tuesday they are working in the port of Rotterdam with six to eight teams to get things going there, but also that with the persistent snow and wind it remains very difficult. DB Cargo Netherlands started on Wednesday morning with some operations, but there were still many difficulties.

Many switches in the network

The biggest difference between the Netherlands and other countries, according to experts, lies mainly in the large number of switches in the track, around 6,000. A single track causes fewer problems with snow and ice than a complicated rail network like the one in the Netherlands with many switches. An explanation about this from ProRail area manager Alf Smolders led to discussion on Linkedin. Why has ProRail not put the switches in a permanent position on the main routes?

ProRail spokesperson Aldert Baas says that switches have indeed been secured as a precaution. “In some crucial places, switches have indeed been set in a fixed position, but that is not possible everywhere. After all, you also rule out possibilities to let train traffic continue. We are therefore always looking for a balance between preventing disruptions and excluding trains and routes.”

In countries where snowfall is more likely, the investments in infrastructure are different, others point out. Considering the fact that snowfall like this only occurs once in every ten years in the Netherlands, preventive measures may be different. “There is a trade-off between investment and chance of occurrence”, Hans Westerink, corridor manager infra development at ProRail said on Linkedin.

But also in Switzerland, a country with relatively more snowfall than in the Netherlands, trains do get stranded. “There are switches that (re) freeze at low morning and evening temperatures, as well as chunks of ice that accumulate in the switches. There are also tracks that are not equipped with point heating. Vehicles and train compositions get stuck there and have to be manually cleared of snow”, wrote the Swiss railway company SBB in a blog last month, when winter conditions had impacted rail transportation in the country.

In Germany, there were major disruptions in rail traffic in North Rhine-Westphalia starting on Sunday. Rail links were cancelled between Hamburg and Hanover, and Hamburg and North Rhine Westphalia. As a precautionary measure, Deutsche Bahn had already removed some train connections from the timetable on Saturday in order to prevent trains with passengers from getting stuck on the open route. Long-distance trains between Germany and the Netherlands were also not possible, and the trains to France were restricted.

Deutsche Bahn could gradually resume some rail traffic on the main lines by Tuesday evening. Further work concentrates on long-distance traffic between the metropolises of Hamburg, Berlin, Frankfurt, Munich, Cologne and Hanover. For rail freight traffic, the emergency services concentrate on the goods traffic corridors, especially to the seaports.