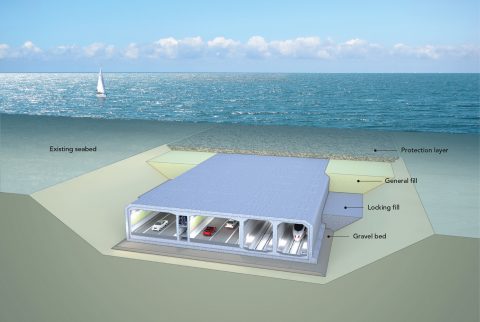 The construction consortium Femern Link Contractors started construction work on the 18 kilometre long tunnel under the Fehmarnbelt on 1 January 2021 with a virtual ground breaking ceremony. This marked the start of the construction of the immersed tunnel itself as well as the associated tunnel portal and ramps, but preparatory works had already started in summer 2020.

The Fehmarnbelt tunnel will comprise a four lane motorway and two electrified rail tracks. It currently takes four and a half hours by train from Hamburg to Copenhagen and ten hours by train between Stockholm and Hamburg. When the Fehmarnbelt tunnel and the upgrading of the rail infrastructure on both sides of the link are completed, the journey time will be cut by two hours. There will also be far more frequent departures on the route.

In the spring of 2020, Fehmarn Belt Contractors (FBC), consisting of the Dutch construction companies Boskalis and Van Oord, already began construction of the working harbour at Rødby. The harbour will be used for shipping in the large quantities of building materials to be used for the construction, as well as to tow the finished tunnel elements out to the Fehmarnbelt. During 2021, FBC will be able to start construction of a working harbor at Puttgarden on the German side and excavation of the tunnel gutter for the tunnel elements under the seabed in the Fehmarnbelt.

The immersed tunnel will be securely sited below the sea bed, protected against ships’ anchors and collisions. Each finished tunnel element is suspended from sophisticated immersion pontoons and will be sealed with watertight steel bulkheads at each end to keep the inside of the element completely dry. They also ensure that its approximately 73,000 thousand tonnes will float, even with its enormous weight. In principle, each floating element is like a large, hollow, air-filled ship’s hull.

The prepared tunnel elements are then pushed into a specially designed basin near the factory. From here, the element will be towed out by four tugboats to the Fehmarnbelt and placed into position. Here, the element will be carefully lowered into a dredged trench on the seabed. From the navigation bridge of the pontoons it is possible to fine-tune the element’s position in the water and control the immersion.

The first tunnel element on each side of the belt will be connected to the portal facility which will connect the coast and sea. The new elements will then be linked together until the tunnel can be assembled with a special element in the middle of the Fehmarnbelt. The elements will be covered with gravel, sand and stone as they are linked together. The top layer of stone will be more or less level with the existing seabed.

Beginning of the project

The Fehmarnbelt Fixed Link appeared on the agenda of the Danish Parliament for the first time in March 1991. The tunnel was approved by a Construction Act passed by the Danish parliament in 2015. In 2016, conditional civil works contracts were concluded with two major international contractor consortia consisting of Danish, German, French and Dutch companies. The contracts encompass approximately 75 percent of the construction.

Denmark will build and operate the tunnel at its own cost, estimated at 7.1 billion euros. The EU provides funds, as the tunnel link is one of the European Commissions nine high priority infrastructure projects that will link cities, ports and production areas from northern Finland across Denmark and Germany to southern Italy.

The tunnel is user-financed according to the same model for the fixed links of the Great Belt Fixed Link and the Øresund Bridge. The project has a repayment period of 36 years, including upgrades to the railway between Ringsted and Rødby, which will also be funded by the profit from the tunnel.

In the video below from Femern A/S the construction of the tunnel is animated: