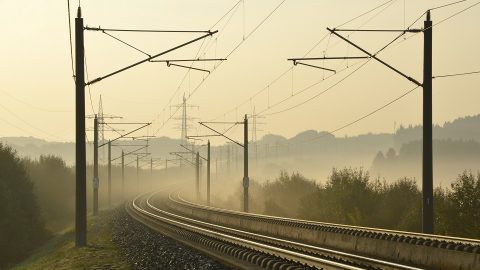 In order to make railways greener and the environment cleaner, Germany should strengthen its focus on the electrification of its railway network. A special attention should be given to five cross-border tracks that run to Poland, Czechia and Austria. Such opinion has been expressed by Allianz pro Schiene and Deutsche Umwelthilfe in their joint call to the Federal Government of Germany.

Allianz pro Schiene, a German association that promotes safe and environmentally friendly rail transport, together with Deutsche Umwelthilfe (DUH), an organisation that preserves biological diversity and protects natural assets, have proposed to the German government to accelerate the electrification of the country’s railways by making a strong focus on the cross-border tracks to the eastern neighbours: Poland, Czechia and Austria. To this end, two mentioned associations have also identified five high-priority cross-border tracks for urgent electrification:

Both associations highlighted two advantages from the electrification of the cross-border tracks, especially the mentioned five ones. On the one hand, the rail sector will be able to reduce its CO2 emissions by replacing the diesel trains and locomotives with the electric-powered rolling stock. Railways, on the other hand, will increase its competitiveness compared to road transport as the electric-powered operations are cheaper and faster than those provided by the diesel locomotives. “We are calling on the federal government to put more efforts into electrification,” emphasized Jürgen Resch, DUH Executive Director.

“The large number of non-electrified border crossings slow down the railways and thus modal shift and climate protection in Europe. There is enormous potential here for climate protection in traffic,” said Dirk Flege, Executive Director of Allianz pro Schiene. Currently, Germany has 57 railway border crossings with neighbouring countries. Only 27 of them or 47 per cent of the total number are electrified.

Most of the non-electrified railway crossings are situated on the German-Czech and German-Polish border: 8 and 13 respectively. The remaining number of non-electrified railway border crossings is broken down as follows: 2 to Austria, 3 to France, 3 to the Netherlands and 1 to Denmark. It is worth to note that all the railway border crossings to three neighbouring countries such as Switzerland, Luxembourg and Belgium are electrified.

A share of the electrified railways in Germany has been increasing slowly in the past 15 years – from 57 per cent in 2005 to 61 per cent in 2019. This means that around 70 kilometres of tracks have been electrifying annually. The government parties set the goal in the coalition agreement to increase the share of the electrified routes in the country to 70 per cent by 2025. In order to achieve this goal, around 500 kilometres of tracks, according to Allianz pro Schiene, should be equipped with catenaries. It is worth to remind that a route length of the German railway network is around 38,500 kilometres. Of there, 33,500 kilometres are operated by DB Netz AG on the behalf of Deutsche Bahn.

One of the border crossings to the Netherlands doesn’t even allow through traffic: the line from Gronau currently ends in a stub at Enschede station.
(Not to mention the Iron Rhine section between Dalheim and Roermond.)